Posted on February 21, 2014 by Brett David Roberts in Headlines,NBA 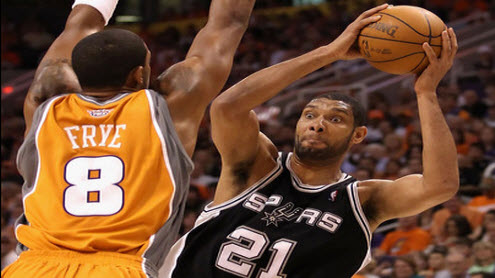 The San Antonio Spurs trail Oklahoma City by 2.5 games for the best record in the Western Conference. The Spurs have won its past three games and are 22-7 on the road this season, but NBA oddsmakers still find the Spurs to be just 2-point favorites over the surprising Phoenix Suns.

Phoenix has gone 32-21 thus far this season and is currently situated 6th in the West. Not many analysts expected the Suns to make the playoffs, and the team has been competitive even without its starting 2-guard Eric Bledsoe. Bledsoe had surgery on Jan 9 to repair torn cartilage in his knee, and though he has been able to do shooting drills he is still without a return date. Prior to injury, Bledsoe was posting 18 points, 4.3 rebounds and 5.8 assists per game.

Point guard Goran Dragic has assumed a heavier role with Bledsoe out, averaging 24.1 points and 7.2 assists over his past 10 games. Dragic is averaging 22.7 points and 7.4 assists for the month of February, and the Suns have gone 4-3 in Feb. Getting Bledsoe back is imperative for the playoffs, though the Suns do have excellent depth. Eight Suns average nine points a game or more, and Gerald Green has done a good job of picking up the slack left behind by Bledsoe. Green is averaging 14.6 points per game on the season.

The Spurs have won three straight with wins over Boston, L.A. Clippers and Portland. Wednesday night’s victory over Portland was a battle, as the Spurs won 111-109 in a game that Tony Parker and Tim Duncan both took off. Patty Mills took full advantage of the increase in playing time, going toe-to-toe with Damian Lillard and holding his own.

Mills scored 29 points and Marco Belinelli hit a go-ahead three pointer with 1:34 in the game. Belinelli, who won the three-point contest on All-Star weekend, shot 7-of-11 from the floor (4-of-6 from three-point range) en route to 20 points. The Spurs simply illustrated, once again, that its supreme depth can cover and allow its featured players to rest. It’s not that the Spurs bench is superior in talent, but Gregg Popovich keeps finding ways to make guys more productive than they would be on any other team. Parker will be out once again with a sprained left hand, while Duncan is questionable or this game, with a number of nagging injuries.