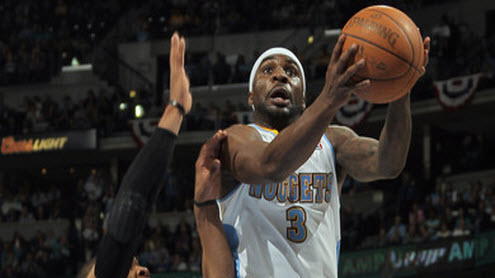 The Chicago Bulls may have lost Derrick Rose for the season and traded de facto leading scorer Luol Deng, but there is no tank in Bull. The Bulls currently sit at 28-25 and trail Toronto by half a game for the third spot in the Eastern Conference. The Bulls are 15-10 at home this season where it will host the Denver Nuggets in a game NBA oddsmakers are favoring the Bulls by 7.5 points.

Chicago has been able to remain competitive primarily due to its defense. The Bulls score the least points in the NBA (92.3 per game), but have the league’s second best defense (92.3 allowed per game) to balance it out. Center Joakim Noah was recently called the league’s best defender by legend Dikembe Mutombo and the Florida product is having a great season, boasting 11.8 points, 11.4 rebounds and 4.6 assists per game. Noah had 13 assists in the 94-92 victory over Toronto on Wed (Feb 19) and he’s had five assists or more in each of the last four games. Particularly impressive was Joakim Noah’s triple double over the Atlanta Hawks on Feb 11, when Noah posted 19 points, 16 rebounds and 11 assists.

Noah has become the directive, though, of an offense lacking options. Carlos Boozer, D.J. Augustin and Taj Gibson are all fine rotation players, but the Bulls lack an elite option to produce at the end of quarters and games. Boozer at one point in his career could have been that guy, but his decline has been marked and it’s possible the Bulls amnesty him at season’s end to help sign a big name free agent.

The Denver Nuggets are three games under .500 and have had its season ravaged by injuries. Ty Lawson was questionable for last game against the Milwaukee Bucks, and getting its leading scorer should help immensely. Against the Bucks, though, Kenneth Faried shined, hitting 11-of-15 from the floor en route to 26 points and six rebounds.

Faried is averaging 11 points and 7.5 rebounds per game on the season. The Nuggets have depth at the forward slots, but are depleted on the wings and in the backcourt. Danilo Gallinari is out for the season and JaVale McGee is likely, too. The Nuggets are lottery-bound in the tough Western Conference, but the team has a lot of assets and talent for retooling for a run next year. Reserve Nate Robinson will also miss the remainder of the season.