Posted on March 11, 2017 by Brett David Roberts in Headlines,NBA 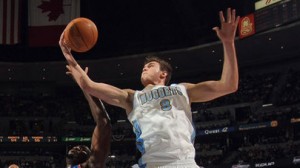 The Sacramento Kings have been predictably bad after trading the only legitimate star they had in DeMarcus Cousins. Sacramento has lost seven-straight and hosts the No. 8 seeded Denver Nuggets as 6-point underdogs Saturday night at 9:30 (CT) on NBA League Pass.

The Kings have fared about as poorly as most expected they would. First the team suffered the loss of second-leading scorer Rudy Gay for the season, and then it dealt superstar DeMarcus Cousins for a package centered around 2016 lottery pick Buddy Hield. Kings owner Vivek Randavive has called Hield the “next Steph Curry,” but barring that unlikely translation, this was a very bad trade for Sacramento. The asking price for Cousins was thought to be a lot higher, and New Orleans top-3 protected pick in the deal may end up being retained in 2017 afterall, with the Pelicans struggling in their own right. That leaves a lot of pressure on one Buddy Hield.

Hield has been good since arriving to Sacramento, and he has been moved into the starting lineup, which only makes sense after giving so much to acquire a guy that other GMs seem no where near as high on. In his eight games as a King, Hield is averaging 13.5 points, 3.1 rebounds and 0.8 assists in 25 minutes a night. His last outing, the first he started in, Hield totaled 18 points on 7 of 16 shooting while hitting 4 of 8 from three-point range. Over his past five games, he has hit 60 percent from three, while attempting five per game. The former Wooden Award winner may yet be a superstar, but the Kings certainly bet the boat on that with precious little proof in his first-half year in the NBA in New Orleans.

The rest of the Kings are simply fighting for bigger roles and their respective places in the NBA. Ty Lawson has come on big in this losing streak, but it has been a losing streak, so it is unclear how much value to put on those nine points and five assists per game he is averaging this season. His career certainly has taken a turn for the worse since the Denver Nuggets drafted Emmanuel Mudiay to replace him. There is no telling if Lawson ever returns to the overall brilliance he demonstrated for a half-decade in Denver.

Darren Collison, Arron Afflalo and Tyreke Evans are all useful veterans, but not on Sacramento. The trio all has their attributes as valuable rotation players, but they are featured contributors on this horrible Kings team. Evans rested last game, but is expected to play today. He had 26 points and four assists in 29 minutes Wednesday night, and he appears to be returning to some of the brilliance he exhibited in his rookie season in Sacto when he averaged 20/5/5 in his first NBA season.

The Kings will need more than a resurgent Evans and emerging Hield to escape the 11-year postseason drought it is now (about to be) mired in, however.

Denver, meanwhile, is making its preparations for a postseason appearance, but it must first secure that No. 8 seed and its eventual matchup with the Golden State Warriors. Denver won 119-99 over the Boston Celtics last outing, and it has gone 5-5 over its past 10 games SU. Nikola Jokic had 21 points, 10 rebound and seven assists and Danilo Gallinari and Wilson Chandler combined for 43 points on 14 of 28 shooting as Denver shot 52.9 percent from the floor in the game.

The Nuggets have promoted 35-year-old veteran point guard Jameer Nelson to the starting lineup, and Mudiay continues to be unavailable. Denver has a glut of guards and depth, and the eventual answer at the 1-spot may end up being Jamal Murray in eventuality, not Mudiay. Murray had 13 points and three rebounds in 17 minutes in the win over Boston, and the former Kentucky Wildcat has looked like the spot up shooter Denver needs to make its high-post offense work.

Jokic is the point-center, in what has proven to be a unique and strangely effective attack in the Mile High City this year.