Posted on January 3, 2018 by Brett David Roberts in Headlines,NBA 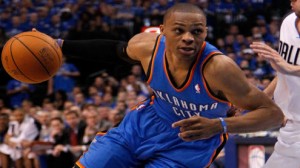 The Oklahoma City Thunder have dropped its past two games and now travel to the Staples Center to face the L.A. Lakers in the second game of a Wednesday night ESPN doubleheader at 9:30 PM (CT). OKC is 6-point favorites in the game, and the Lakers are just 6-12 at home this season. The over/under is set at 211.5 points according to NBA oddsmakers at bookmaker 5dimes.

While Russell Westbrook continues to play amazing basketball, Carmelo Anthony is struggling to find his niche and role with his new team. Chances of demoting Anthony to a Sixth Man remain low, howsoever it might be the best thing that Billy Donovan could do to inject some life into the Thunders’ second unit. Anthony is averaging a career-low 17.3 points per game and attempting just 15.9 field goals per game.

Similarly, Paul George has reduced his load to 17 shots per game, but Westbrook maintains his 20.8 field goals per game. The balance needs to be struck more, particularly since outside of that big Three, and Steven Adams, the Thunder get so little offense from the rest of its cast.

Indeed, a sheer lack of depth continually hurts the Thunder. Jerami Grant, Ray Felton, Alex Abrines and Andre Roberson are all fine players, but a team is in trouble when that quartet comprises its fifth through ninth best players. None of them are major scoring threats, and the Thunder still are not vastly utilizing Patrick Patterson, who looms as a potential source of mid-range shooting and rebounding. While the team does not likely regret losing Victor Oladipo, as well as he is playing in Indiana, maybe it should.

Beyond that, it is not likely George remains in OKC after this season, making this experimental rental all the more of a failure if the Thunder cannot manage to get more from George, and the rest of its team. The Thunder have been strong defensively, but with just three scorers and an active Adams, it is difficult to envision this team posing any legitimate threat to either Houston or Golden State.

The L.A. Lakers continue to pile up the losses, but the team is looking more promising in many respects. Rookies Lonzo Ball and Kyle Kuzma are both playing well, particularly Kuzma, the Utah product who ranks No. 1 on the team in scoring at 17.5 points per game. Lonzo Ball is at 10 points, 6.9 rebounds and 7.1 assists on the year, and the comparisons to Jason Kidd continue, for better or worse.

What Ball does do, is make the Lakers a better team when he is on the court. His vision and leadership has been apparent even as a rookie, and several other Lakers have shown vast improvement. Among them is former No. 2 overall pick Brandon Ingram, who is averaging 16.1 points, 5.4 rebounds and 3.3 assists in 35 minutes a night.

Former Detroit Piston Kentavious Caldwell-Pope has been something of a disappointment but is still a steady 2-guard and a bit of an upgrade over what Lou Williams did (score and score, basically). The Lakers still just play horrible team defense, and adding Brook Lopez was no surety to improve on that end of the court. Opposing bigs seem to batter the Lakers exceptionally well, and the perimeter defense has been average at best.

Kentucky product Julius Randle has faded out of the picture, but his undersized stature was never at the root of the problem anyway. The Lakers just do not rotate well defensively and Lopez is not a rim protector, notwithstanding that he blocks 1.6 shots per game. Larry Nance Jr.’s effort can be infectious, and perhaps if all the Lakers displayed Nance’s defensive acumen this would be a plus .500 team, but it is difficult to win with the layup drills teams regularly perform against the Lakers’ lackluster defense.