Both clubs are in the playoff race as they start a three-game series at AT&T Park in front of a ESPN2 audience. 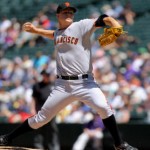 Cincinnati currently leads the NL Central division by 3 1/2 games with six weeks to go, as the team starts a three-game series against the Giants.  The Reds captured a 5-2 victory over the Dodgers on Sunday afternoon giving the team its eighth win in nine games and guaranteed a winning nine-game West coast road trip.  “You can’t help but notice we haven’t done much winning in Los Angeles,” first baseman Joey Votto said.  “For us to be the team that finally breaks that streak and gets a winning series on the road, it’s a good thing.”  The pitching staff has been fantastic since June 17, posting a 3.15 ERA, which is the third-best mark in the majors over that span.  Offensively, the club leads the NL with a .272 average and scoring 4.96 runs per game.  The Reds are 15-5 in August (+1,020) and 10-4 as a road underdog of +100 to +125 this season (+760).

Reds starting pitcher Edinson Volquez is 3-1 with a 4.98 ERA in seven starts this season and the club has won his last five starts.  Over that span, the team has outscored opponents by a 36-17 margin, with the right-hander tossing just 26.1 combined innings.  He has yet to earn a decision away from the Great American Ballpark, giving up 10 runs and 18 hits over 15 frames.  In two career starts versus the Giants, Volquez is a perfect 2-0 with a 5.11 ERA, while not giving up a home run in 12.1 innings.  He has a 11-15 record and 5.75 ERA in 40 career appearances (37 starts) after the All-Star break, which is well off from his 16-5 mark and 2.90 ERA in the first half.

San Francisco has dropped 11 games this month already surpassing eight defeats for all of July.  The Giants are 9-12 in August this season (-330) and the total is 10-11 O/U in those contests.  The starting staff has struggled since August 7, producing a 2-9 record and 5.60 ERA, as the team has dropped nine of 15 over that span.  “You can’t let a game or two get you down,” manager Bruce Bochy said.  “We’re headed home.  We hope to play better.”  The club has a good chance of turning things around in this series, coming in with a dominating 23-10 record against NL Central opponents.  The Giants are also 3-6 in a current 12-game stretch in playing opponents that are in the playoff picture.  San Francisco is 8-5 when playing on Monday in 2010 and an incredible 143-87 in this spot since 1997 (+5,640).

Giants starting pitcher Matt Cain is 9-10 with a 3.11 ERA in 25 starts this season and his team has alternated wins and losses in his last four outings.  He dropped an 8-2 decision in Philadelphia last time out, giving up five runs (two earned) and seven hits over six innings of work.  The right-hander is a solid 6-3 with a 2.62 ERA in 12 home starts, as opponents are hitting a combined .199 against him.  He has pitched well over his last seven starts since the break, posting a 3-2 record and 2.51 ERA over that span.  Cain is scheduled to make his eighth career starts versus Cincinnati and second this season.  He is 3-3 with a 3.21 ERA in the seven previous outings, while picking up a 3-0 complete game shutout on June 8 at Great American Ball Park.