The Phillies are almost at full strength offensively and face off against a former teammate at Citizens Bank Park this evening. 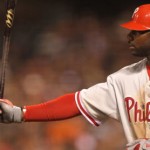 Houston salvaged the final game of a three-game series in Florida with a 2-1 victory at Sun Life Stadium on Sunday afternoon.  The Astros now move on to Philadelphia where they have a 12-7 all-time record at Citizens Bank Park and a 26-16 overall mark against the Phillies since the start of the 2004 season.  Tonight’s contest is the fourth game of 10-game road trip against the NL East, as the club is 9-14 versus the division this season.  The starting staff has carried the load recently, posting a 2.54 ERA in the last 13 games, with the team compiling a 7-6 record in that span.  Houston is 34-55 against right-handed starters this year (-1,000) and the total is 44-41 O/U in those contests.  It’s also important to note the team is 5-8 as a road underdog of +125 to +150 in 2010 and a dismal 22-36 in this situation the last three years (-580).

Astros starting pitcher Brett Myers is 8-7 with a 3.11 ERA in 25 starts this season and the team has alternated wins and losses in his last four outings.  In his last appearance, he allowed two runs and seven hits over seven innings, while the club dropped a 3-2 home contest to the Mets.  The right-hander is a disappointing 2-7 with a 3.96 ERA in 13 road games this season, but opponents are hitting for just a .231 combined average.   He will be making his 19th nighttime start, posting an even 6-6 mark and 3.02 ERA, surrendering 11 home runs in 125.1 innings of work.  Myers will be making his first appearance at Citizens Bank Park since throwing an inning of relief in Game 3 of last year’s World Series for his former club.

Philadelphia has won six of eight games overall and enter this series having won five of six meetings versus the Astros this season.  The Phillies are also excited to have eight players that were in the opening day lineup on the field this evening.  Despite all the injuries, the club is atop the wild card standings and are only 2 1/2 games back of the NL East-leading Atlanta Braves.  “We’re not really at the wild card,” said outfield Raul Ibanez.  Since July 22, Philadelphia s tied with the Minnesota Twins for the best record in the majors at 21-7 and have outscored opponents by a 138-95 margin in that span. The team is 14-5 in August (+840) and the total is 11-8 O/U in those contests.  The Phillies are also a solid 11-6 as a home favorite of -125 to -150 this season (+280) and 36-24 in this situation over the last three campaigns (+340).

Phillies starting pitcher Joe Blanton is 5-6 with a 5.54 ERA in 20 starts this season and the club has won his last three outings overall.  Over that span, he has allowed eight runs and 23 hits over 19 innings of work, while issuing just four walks and compiling 14 strikeouts.  The right-hander is 4-2 with a 4.72 ERA in 11 home starts, as opponents are hitting for a combined .307 average.  He will be making his 11th nighttime start, posting a 2-3 mark and 5.00 ERA compared to an even 3-3 record and 6.10 ERA during the day.  In two career starts versus the Astros, Blanton is 1-0 with a 4.15 ERA, giving up just a single home run in 13 innings.

Bettors will be interested in knowing that the Astros are 2-6 in Myers’ last eight starts as a road underdog and the under is 5-2-1 in those contests.  Philadelphia is 22-7 in Blanton’s last 29 starts as a home favorite and the over is 8-0-1 in his last nine home starts.