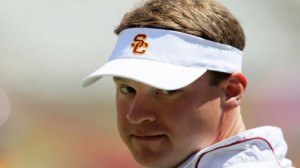 Lane Kiffin makes me laugh. I can say that because he has never done anything to a team that I really care about. The Raiders mean nothing to me, I detest Peyton Manning so I clearly have no love for Tennessee, and don’t like USC because they are so sickeningly unlikable, but I certainly don’t hate them in any real way – it’s not like they are Ohio State or anything. Based on the amount of press he is getting these days, though, it seems obvious that I am the exception and not the rule when it comes to the degree to which his actions bother me. His actions over the last few years have been very circus-like, and the intense scrutiny the media has placed him under has given the circus at least three rings. I’m just amused by the whole situation but a whole lot of people aren’t. There is a great deal of intensity and bitterness, and people are reacting emotionally and not rationally to him. Anytime a great deal of emotion is involved in a situation bettors have to be particularly aware of what is going on, and what impact it could have on the teams and players involved and, more importantly, on the odds on the games in question. As you try to decode Kiffin’s impact on the college football betting lines this fall, and the opportunities that it will create, here are four things to consider:

He hasn’t actually won anything – What makes this whole situation so captivating and bizarre is that the guy just isn’t that much of a coach – or at least he hasn’t shown that he is one yet. He was a ridiculous 5-15 with the Raiders, and though his 7-6 at Tennessee was notably better it’s still a long way from a good performance. Overall he has a totally underwhelming 12-21 record. Even Charlie Weis could make fun of what Kiffin has accomplished. If Lane wasn’t the son of Monte Kiffin then he probably wouldn’t be under the microscope that he is. Of course, if he wasn’t the son of Monte then he probably wouldn’t have had all of the opportunities he has had  – he’s got his third very high profile job despite only being 35. The point here is that people are spending a lot of time and energy talking about and worrying about a guy who isn’t really worth talking and worrying about. The coverage is very disproportionate.

Must be something to him – This is the flip-side of the last point. Sure he seems like a lunatic, and sure he has a very highly respected father, but there has to be more to it than that. After all, despite the reputation issues and the lack of real accomplishments the guy has managed to keep getting jobs. Every job he has had he’s gotten at a much younger age than would be the norm. It’s easy to totally write off a guy like this because he seems like a total idiot, but that would be a mistake in this case – there’s something behind the outward stupidity that we don’t get to see.

Fan sentiment makes people do crazy things – Because people are going to react emotionally, and because every single move is blown up and overstated as soon as it happens there are going to be a lot of people drawn to USC’s games not because of the real opportunities they present but because they want to see the guy get beat. The assumption, then, would be that betting on him would be a good idea because all college football handicappers will be betting against him and that could mean value. That’s ridiculously oversimplified, of course, but it will be very important in this circumstance to look at where the action is and how the college football odds listed compare to where they should be.

He’s on a short leash – USC is in a lot of hot water right now. Outside of the lawsuit from the Tennessee Titans over the hiring of the new offensive coordinator none of it is Kiffin’s fault, but Kiffin is going to have to deal with the fallout. The biggest immediate impact is that athletic director Mike Garrett has been replaced with Pat Haden. Haden is a no-nonsense guy who is charged with get the program back on track, and he is going to be very aggressive to do so. Garret hired Kiffin and was a big fan of him – obviously enough of one to unleash the firestorm of controversy that the hiring inevitably caused. Haden not only didn’t hire Kiffin, but he doesn’t seem like the kind of guy that is going to have a lot of patience towards him, either. I don’t think that Haden would hesitate to fire Kiffin after a year if things didn’t go well. It really would make sense since the probation would give a new coach a year to establish themselves before games matter. If Kiffin acted rationally then he’d probably fall in line because of Haden. Now the challenge is to figure out if he is a rational guy.