Posted on October 11, 2014 by Brett David Roberts in Baseball,Headlines 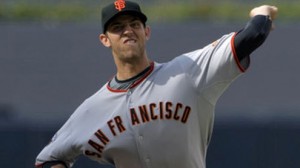 With the NLCS beginning, the Saint Louis Cardinals are turning to Adam Wainright to counter Madison Bumgarner for the San Francisco Giants. Betting odds show the Cardinals as 1.5-point favorites, with a moneyline of -123. For the series, the Cardinals are favored as well, after knocking of Clayton Kershaw and the L.A. Dodgers to win the division series with a 3-2 victory at home.

Despite the win, the Cardinals only managed four hits. The Dodgers had eight hits but were only able to turn it into two runs.

Wainright was 20-9 during the regular season with a 2.38 ERA. He also posted a WHIP of just 1.03, while striking out 179 batters. Wainright turned in an impressive postseason in 2013, pitching five games and 35 innings with a 2.57 ERA and 0.97 WHIP. He allowed 31 hits in those five appearances, but just one home run. If the Cardinals can count on that continued brilliance, Game 1 could give the Cardinals the edge that MLB oddsmakers anticipate.

Wainright and the Cards will have their hands full with Buster Posey. He’s hitting .391 in the postseason with two RBs and nine total bases. Brandon Belt is batting .333 and has seven hits, 10 total bases and five RBIs. The point total will hinge on how well the other Giants can hit the ball. The team is batting just .236 in the postseason.