Posted on August 20, 2010 by Kenny Gilbertson in Headlines,NFL 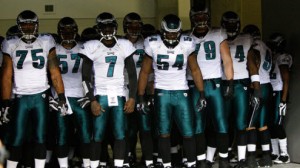 The opening total for the game was 35, though every sportsbook on our NFL betting lines page has pushed that number to 37.5. Further, the betting public is nearly 2/3 in favor of the under (65%). This is a fine situation for a gambler. When either the spread or the total moves in the opposite direction of the betting majority, chances are the betting ‘wiseguys,’ or professionals, are the reason for the reverse action. If given the choice between following the betting public or betting professions, I prefer siding with the wiseguys.

The over looks like a solid play for a variety of reasons. Last week the Eagles and Bengals scored 33 and 34 first half points, respectively. The Eagle defense looked good early against Jacksonville, but then gave up 244 yards passing and 3 touchdowns to Luke McCown in a 28-27 victory. The Bengals, on the other hand, gave up 2 first quarter touchdowns to Kyle Orton and the Broncos, eventually prevailing 33-24. For both teams, the play of the offense appeared to be ahead of the defense.

While each defense tries to find better footing, the offensive personnel from each team will make that task especially difficult. First-year starter Kevin Kolb’s development has earned praise from his head coach. According to Reid, “I think he [Kolb] showed that he’s very capable of doing this thing. It’s way more stress than he’s ever had on his arm or asked to do from a throwing standpoint. I thought he did a very good job of that. His command and the intangible part of it, he maintained what we thought he would do and what he did last year.” Backing up Kolb is the versatile Michael Vick who last week looked good throwing the football, and scored on an exciting 10 yard touchdown scamper. The third-string signal caller is rookie Mike Kafka, who while at Northwestern showed his ability to both run and throw the football. Look for this three-headed monster to put an extraordinary amount of pressure on the Bengal defense.

Cincy counters with perhaps the best receiving corps in the League. Everyone knows about Terrell Owens and Chad Ochocinco. But beyond these two superstars the Bengals sport an impressive collection of pass-catchers. Matt Jones and Antonio Bryant are proven NFL caliber receivers, although Bryant is expected to miss the game. Three Big 12 rookies add depth. Texas rookie Jordan Shipley has incredible hands, and last week hauled in 5 passes for 50 yards. Fellow rookie, tight end Jermaine Gresham out of Oklahoma, looked good last week with 3 catches for 37 yards. And Desmond Briscoe, out of Kansas, has both the size and speed to be an impact-making receiver. Carson Palmer and J.T. O’Sullivan looked to be in much better rhythm last week, going a combined 19-30 for 213 yards.

The Eagles gave up ridiculous numbers to Luke McCown. Granted, most came against far less talented backups, but Luke McCown did not have the receivers that J.T. O’Sullivan does. I don’t think much will change this week. Look for the Philly defense to be soft against the pass, and counter with a potent offensive attack. Worth noting is in last year’s four preseason games, the Eagles played over 37 total points every game. It’s hard to say who comes out on top in this one, but over 37.5 points seems to be a winning play.

For our opinion on the side check out the NFL football picks page from Maddux Sports.  Offering winning picks at a reasonable cost to all sports gamblers.