Posted on November 16, 2013 by Brett David Roberts in College Football,Headlines 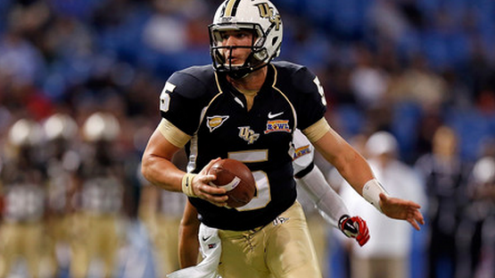 The 7-1 UCF Knights have been one of the surprises of this college football season, propelling itself into a No. 17 ranking on the heels of one of the best defenses in the nation. UCF stands at a perfect 4-0 in its new conference, the American Athletic Conference, and college football oddsmakers at Bovada find the Knights to be 17.5-point favorites over the Temple Owls this Saturday.

Blake Bortles has been sensational at quarterback for UCF this year. Bortles has thrown 2,080 yards at a 67.6 percent completion clip, and he’s amassed 15 TD passes to just five interceptions.

Running back Storm Johnson has done a great job in the backfield, and he’s rushed for 719 yards on the year, averaging 5.1 yards per carry. Johnson also has nine rushing TDs on the year and three receiving touchdowns. The Knights are strong on both sides of the ball, and teams are forced to honor both the rush and arm of Bortles.

Temple has struggled defensively this season, allowing 30 points per game, which ranks it 85th in the nation. The Owls, meanwhile, generate just 22.3 points per game and the team has lost its last two games by an average of 6.5 points. Temple’s lone win of the season came over Army, and after this week the Owls will face UConn and Memphis.

Check our our paid pick plans for the remainder of the 2013-14 NCAA football season!