Posted on March 16, 2013 by Brett David Roberts in College Basketball,Headlines 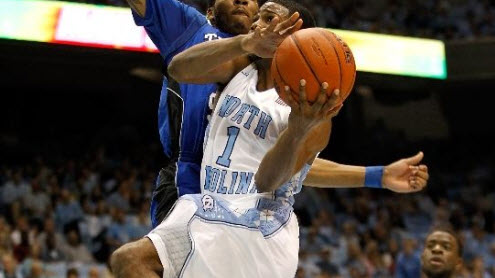 Maryland pulled a shocking upset over No. 2 Duke on March 15, and they’ll try to build on that momentum Saturday afternoon (March 16) in a hotly contested matchup against the UNC Tar Heels. In the victory over Duke, the Terrapins held Duke to 4-of-25 from three-point range, which was a huge factor in the victory.

Another huge factor was swingman Dez Wells, who hit 9-of-13 from the floor and all 10 of his free throws to finish with a game high 30 points. It was Wells’ season high, and it couldn’t have come at a better team for a Terrapin team trying to generate steam heading into the NCAA tournament. The 6’5″ sophomore has scored 20-plus on five other occasions, and Maryland has won four of those five contests. Getting Wells going is obviously a huge key for the Terrapins.

Maryland has a well balanced attack, and joining Wells in double-figure scoring averages is center Alex Len, who is projected to be a top-five pick in the 2013 NBA Draft. Len’s size and mobility have surprised scouts, and the center heavy crop of rookies in the 2013 draft will feature Len as one of the prize names. The sophomore has shown big strides since last season, nearly doubling his scoring average to 11.8 points per game, while also increasing his rebounds to eight per game.

The North Carolina Tar Heels sit with a 23-9 record and have a 12-6 record in ACC play. They’re coming off a 21-point victory over the Florida State Seminoles, but will have a much tougher test in Maryland. The Tar Heels let Michael Snaer of the Seminoles get his, but shut down all of his teammates. Outside of Snaer’s 8-of-12 shooting, the Seminoles shot just 15-of-39 from the floor.

James Michael McAdoo will have the task of slowing down Len, and the 6’9″ sophomore forward will be a high draft pick in June, much like Len. McAdoo has posted 14.6 points per game and 7.6 rebounds in 30 minutes of play a night for the Tar Heels. He has his weaknesses: he should shoot better percentages from both the field and from the line—but he’s the Tar Heels best player. He’s their strongest hope to defeat a tough Maryland squad in a game that is of paramount importance for both teams’ bid for the NCAA tournament.