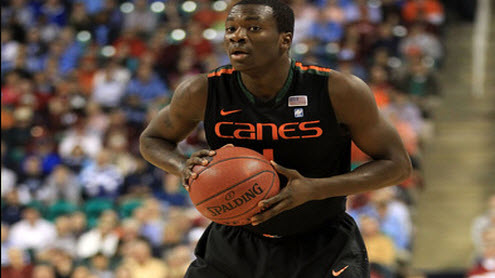 The ninth ranked Miami Hurricanes sit at 25-6 with a 15-3 ACC record, but to take home the ACC title they’ll first have to go through NC State. The Wolfpack are 24-9 overall and finished with an 11-7 ACC record.

Larkin’s 13.7 points per game lead the Hurricanes, and Kenny Kadji and Durand Scott each score about 13 a game as well, helping provide Miami with a very balanced scoring attack that renders they offense diversified and hard to predict. Kadji is shooting 67 percent from the floor, part of what enables the Hurricanes to shoot nearly 46 percent as a team.

Kadji was a great surprise for the Hurricanes in 2010-11, and the Florida transfer has only gotten better during his time in South Beach. He’s a good long range shooter, and he’s a great defensive presence (see: 1.4 blocks per game).

Reggie Johnson has been an overwhelming disappointment for the Hurricanes after showing so much promise in prior seasons. Johnson’s seven points and seven rebounds per game pale in comparison to the gaudy double-doubles projected for him four seasons ago.

NC State is led by five guys in double figures, the highest of which is C.J. Leslie’s 14.9 points per game. Leslie, a 6’9″ junior forward, is also second on the team in rebounding with 7.5 boards per game. He hasn’t really stepped up his play from last season much, but has continued his very steady play and is once again shooting 52 percent from the floor. Leslie and 6’8″ senior Richard Howell will have the task of slowing down Kadji, so that should be a crucial matchup to keep an eye on.