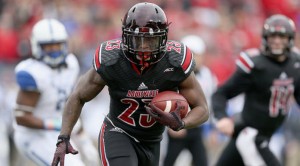 Lamar Jackson became a household name last week. The Louisville Cardinals became national threats last week. It might be fully aboard the hype train, but after Louisville’s 63-20 dismantling of then-ranked No. 2 Florida State in Week 3, college football fans are taking seriously the threat of Jackson and the AAC Cardinals being national contenders.

Jackson and the Cardinals dominated from kickoff to final whistle, and the Cardinals defense did not disappoint in its frustration of FSU quarterback Deondre Francois. Jackson got the better, throwing 13 of 20 for 216 yards and a TD while rushing for 146 yards on 17 attempts and four rushing TDs. Jackson was a one man wrecking crew, but he also got some help from Brandon Radcliff and Jeremy Smith.

Radcliff had 118 yards on 14 carries and Smith had two of the team’s six rushing TDs. James Quick did damage from the slot with 122 yards on seven catches, as Louisville gained 216 passing yards on 13 receptions, averaging 16.6 yards per attempt. It was a dominant performance by the Cardinals against what was supposed to be a contending Seminoles team. Now it is Louisville that has captured the nation’s attention.

The Cardinals head into this Week 4 matchup against lowly Marshall as 30.5 point favorites. Jackson’s sophomore season is building brilliantly on his 2015 freshman campaign. Last year he threw for 1,840 yards on 54.7 percent passing, but averaged just 7.45 yards per attempt.

This season, he is at 11.13 yards per attempt and a 61 percent completion clip. He has thrown eight TDs, two interceptions and been sacked just twice, all the while rushing for 119, 199 and 146 yards in Louisville’s three games. He is a legitimate Heisman contender.

Marshall is 1-1 after losing 65-38 to Akron last week. Chase Litton was very active, throwing 32 of 57 for 413 yards and four TDs, but he threw three interceptions and Marshall’s defense was abysmal. The Thundering Herd allowed the Akron receivers to go for 379 yards on 21 catches with four receiving TDs to supplement the two rushing. It was a defensive disaster for Marshall.

The Thundering Herd defeated Morgan State 62-0 in Week 1, but little meaningful data can be withdrawn from that. This week should be pretty torturous for the Herd given the momentum of Jackson and the Cardinals. There is no reason to expect this game to be close, and college football oddsmakers certainly agree in heavily favoring the Cardinals.