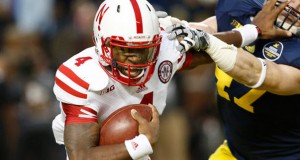 The Nebraska Cornhuskers improved to 3-0 last week with a 35-32 victory over then-No. 22 Oregon. The victory moved the Huskers into the No. 20 ranking nationally, and it will travel to face Northwestern as it begins Big Ten play this week. The Huskers are 7.5 point favorites against the 1-2 Wildcats.

Nebraska won last week on a late TD by Tommy Armstrong Jr, as he threw a 34-yard pass on a QB draw to help the Huskers pass Oregon 35-32 in pulling a slight upset of the Ducks. Armstrong was 17 of 33 fro 200 yards with three TD passes, and he rushed for another 95 yards on a 16 carries with a rushing TD.

Nebraska rushed for 228 yards in the game, as Devine Ozigbo got it going to rack up 95 yards on 21 carries. He and Armstrong accounted for 190 of the 228 yards, with Terrell Newby being the only other notable rusher with 42 yards on seven carries.

Nebraska gained 200 yards in the air, and it had four receivers with 35 yards or more, led by Jordan Westerkamp’s 39 yards on three catches and two TDs. The 6’0” senior wide receiver caught for 918 yards and seven TDs last season, but he is on pace to have an even better season this year. He is averaging 18.8 yards per catch and has a long-pass of 55 yards and four TDs through just three weeks.

Westerkamp has been a strong contributor the past two seasons and was impressive as a freshman in 2013. The build up has been ramping up to what should be his big senior season, and he has not disappointed so far.

Northwestern rebounded last week with a 24-13 win over Duke after having lost Weeks 1 and 2 to lowly Western Michigan and Illinois State. Clayton Thorson threw 18 of 39 last week for 320 yards and three TDs, but he did throw two interceptions while accruing a QBR of just 43.9. Justin Jackson was not efficient, but he did rush for 94 yards on 28 carries (3.4 yards per).

Only Jackson had any success rushing the football, as the rest of the team accounted for a total of -8 yards. Austin Carr was the star of the offense with six catches for 135 yards and a TD, as the Wildcats managed all three of its TDs in the pass game.

Thorson is a sophomore and is coming off a tough freshman season that saw him throw for 1,522 yards last season with a 50.8 percent completion ratio. He threw more interceptions (nine) than TDs (seven) last season, and he was sacked 22 times.

Thorson has talent, but he is going to have to step it up this season if the Wildcats are to be much more than Big Ten doormats. He has already thrown two picks and is being sacked 3.67 times per game. It is not a good start for Northwestern football and the 1-2 Wildcats as they open the actual tough part of their season.