Posted on November 15, 2014 by Brett David Roberts in College Football,Headlines 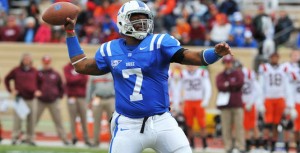 It hasn’t been a great season for the Virginia Tech Hokies. Tech has fallen to 4-5 on the season with a 1-4 record in ACC contests and will travel to Duke where the Blue Devils are 4.5-point favorites according to NCAA football oddsmakers at Bovada.

The Hokies fell 33-31 last week to Boston College. Despite losing, the Hokies had an edge in total yardage, 414 to 368. Virginia Tech also had more first downs and was 4-of-5 on fourth down conversions, and the team overcame a 23-10 deficit, but a fake punt got them going. Following a Michael Brewer TD run, the Hokies cut the lead to six.

A Bucky Hodges TD reception gave VT the lead, but the Eagles would kick a 44 yard field goal and Tyler Murphy put the Eagles up nine on a 57-yard TD run. The Hokies answered back to pull within two, but with just 28 seconds on the clock its fate was sealed.

VT has had a strong defense this season allowing 22.6 points per game, but over the three game skid the Hokies have allowed 30 or more in two of the three contests. No. 21 Duke has a strong offense that will test Virginia Tech, but the Hokies are strong offensively too. Virginia Tech gets 241.8 yards per game from the pass and 139.9 from the ground, averaging 26.2 points per game.

Important to note, also, is that the Hokies took down then-No. 8 Ohio State in Week 2, so the Hokies can hang with ranked opponents like Duke. The college football point spread reflects the strength of a VT team that just hasn’t been able to win of late.

Duke’s backfield this season has been phenomenal. Shaun Wilson leads the attack with a team-high 535 yards while averaging 9.2 yards per carry and having scored four TDs on the season. Shaquille Powell and Josh Snead have both rushed for over 300 yards while both boasting five-plus yard per carry averages.  The Blue Devils should be able to find success on the ground, and may need to.  QB Anthony Boone has rushed for 247 yards with four rushing TDs. Boone has done fairly well keeping his interceptions low, but has middling accuracy and poor yards per attempt.