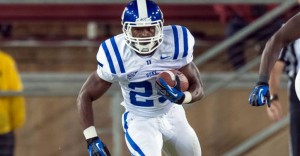 North Carolina has not lost since its week 1 stinker against South Carolina. As victors of seven straight games and holders of the No. 21 ranking, it will host the Duke Blue Devils in a game that NCAA football oddsmakers are favoring the Tar Heels by 7.5 points. The over/under for the game is 58.

UNC is atop the ACC Coastal division and last week knocked off Pittsburgh 26-19. Marquise Williams had a monster game, throwing 14 of 23 for 270 yards with two TDs and no picks, while also rushing for 52 yards on nine attempts. RB Elijah Hood had 98 yards on 20 attempts, and WR Ryan Switzer had 126 yards on five receptions including a 71-yard catch.

Mack Hollins only caught two passes but one was a 49-yard reception and the other was 32-yards.

Kicker Nick Weiler is having a good season having hit 14 of 16 FGA including four of five from 40-plus yards.

Duke lost to the Miami Hurricanes last week 30-27, but it was lost on a bizarre 8-lateral kick return for a TD. The kick was returned for 75 yards and gave Miami the edge.

Thomas Sirk threw 31 of 52 for 258 yards with a TD, while Jela Duncan was good for 51 yards on seven attempts, with one TD. Sirk rushed for another 51 yards himself and Shaun Wilson and Shaquille Powell combined for another 77 yards on 17 carries combined.

Sirk has thrown for 1,788 yards on the season with a 60 percent completion ratio, and he has 12 TD passes with just three INTs. Sirk’s passer rating on the year is 125.6, and he has rushed for 481 yards and three TDs.

No. 1 back Powell has rushed for 351 yards on 85 carries with three TDs and the Blue Devils have 16 rushing TDs as a team. McCaffrey has caught 34 passes to lead the team and he has 450 yards (13.2 per attempt) on those catches to go with a trio of TDs on the season.

Purchase our season pick plans to get in on the winnings!

Head to Head
Under is 5-1 in the last 6 meetings in North Carolina.
Underdog is 4-1 ATS in their last 5 meetings.