Posted on September 21, 2018 by Brett David Roberts in College Football,Headlines 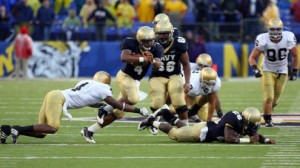 The Navy Midshipmen are 2-1 after winning consecutive Week 2 and 3 matchups against Memphis and Lehigh. It opened the season with a loss to Hawaii, and it now travels to face SMU in Conference play as 7-point favorites. The over/under is set at 60 points according to college football oddsmakers at 5dimes, and the game will air at 11 AM (CT) on ESPN.

Navy had few problems routing Lehigh last week. Malcolm Perry did most of the damage. Perry threw just 2 of 9 with an interception, but he rushed for 223 yards on 19 carries (11.7 yards-per-carry) while rushing for three TDs. Myles Fells added a 52-yard TD rush, and Garret Lewis had 45 yards and a TD on his seven attempts.

Navy rushed for 484 yards in the game with a 7.8 yard-per-carry average, and it managed six rushing TDs. Never had a one-dimensional attack been so unstoppable, and Lehigh’s 162 rushing yards (decent by all accounts) just failed to measure up the wreckage and assault offensively by the Midshipmen.

Navy has attempted just 33 pass plays on the season while rushing a near full six-times as much with 184 rushing attempts. Malcolm Perry is already to almost 500 yards on the season with six TDs, and Zach Abey has six TDs as well despite just 15 rush attempts on the season. Expect more of the same in Week 4 from Navy, but will it be as effective against the SMU Mustangs?

It probably will be. SMU’s defense has been horrid. The Mustangs gave up 46 points in Week 1, 42 in Week 2, and 45 points in Week 3, all of which were lopsided losses. SMU is led by quarterback Ben Hicks, but his lack of accuracy is troubling. Hicks is just 37 of 78 (47.4 percent) with three TDs and two interceptions while having amassed 476 passing yards on the season.

William Brown has been better with 11 for 17 and two TDs to his name, but the Mustangs are also only averaging 3.0 yards-per-carry, and outside of leading-rusher Braeden West, few have had much success. James Proche leads all receivers with 293 yards on 19 catches and three TDs, but the Mustangs defense will need to tighten up—and it is having trouble doing so without many defensive playmakers. It is high time for SMU to recruit some defensive talents. The Mustangs are just barely talented enough on the offensive end of the football but will win few games while surrendering in excess of 40-points. Navy has enough rushing talent to continue to exploit this, and the Midshipmen should prevail in this conference matchup, as NCAA football oddsmakers have favored it to. Expect Navy to win by 10-plus and cover this spread, likely, too.