Posted on May 5, 2014 by Brett David Roberts in Headlines,NBA 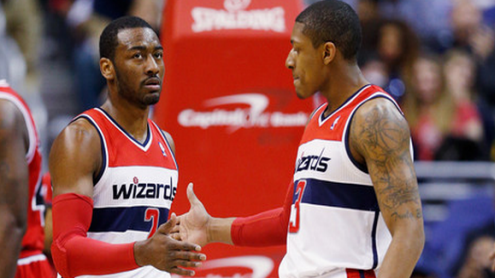 The Washington Wizards surprised most analysts and fans with an upset of the Chicago Bulls in the first round. The Indiana Pacers, meanwhile, struggled to dispatch the 8th seeded Atlanta Hawks, eventually advancing after a game seven.

The Pacers are a great defensive team and started the 2013-14 season on fire, but late season struggles have led to immense doubt as to whether Indiana can’t get it together in time to challenge the Miami Heat, should they advance. The Pacers find itself 4-point favorites according to NBA oddsmakers at Bovada.

Paul George feels the Pacers are ready for the tough offensive backcourt of John Wall and Bradley Beal. George said the Atlanta series “helped (us) in terms of understanding how to be in gaps, being there for one another, rotating…” Rotations will be key, especially given the hot shooting of Wizards small forward Trevor Ariza, who routinely camps in the corner and somehow is still open frequently.

The Wizards also have the size to contend with Indiana’s tough frontcourt of David West and Roy Hibbert. Hibbert had a historically awful first round, but Indy will need him to bounce back and play like the two-time All-Star he is. The Wizards’ Marcin Gortat and Nene Hilario are underrated and tough, and both are great in pick and roll situations both offensively and defensively.

West had a great series against the Hawks, and it will likely fall on Nene to contain him. He’s played some of the most well-rounded ball of his career and his veteran leadership is one of the strings holding the Pacers together as a team.