Posted on April 16, 2014 by Brett David Roberts in Headlines,NBA 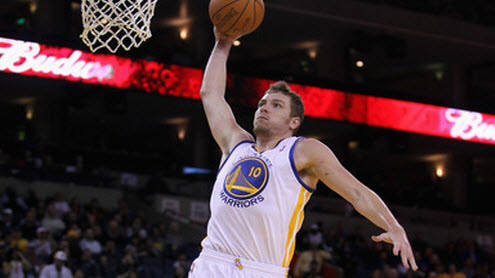 The Golden State Warriors are 50-31 and hold a one game lead on both Dallas and Memphis for the 6th seed in the West.

The Warriors will travel to face the 36-45 Nuggets in a game NBA oddsmakers are favoring the Nuggets by 8.5 points.

The Warriors were victorious over Minnesota Monday night, winning 130-120 behind 32 points and 15 assists from point guard Stephen Curry. Curry is averaging 24 points and 8.5 assists per game this season, and together with Klay Thompson forms a potent scoring backcourt.

Thompson has improved as a defender, but is best known for his lights out shooting. He’s averaging 18.5 points and is second on the Warriors in scoring. Forward David Lee has been consistent as usual and improved his defense under the tutelage of Mark Jackson. Lee is averaging 18.2 points and 9.3 rebounds per game.

The Nuggets have had a tough time this season under first-year coach Brian Shaw. The team has dealt with injuries to key players and Danilo Gallinari has sat the entire season.

The team may not have its first round pick as a result of the trade involving Dwight Howard, but the Nuggets should be formidable again next season when healthy. Shaw will have to find a way to get his players playing better defense, though. The Nuggets allowed 106.4 points per game this season.