Posted on March 21, 2013 by Brett David Roberts in College Basketball,Headlines 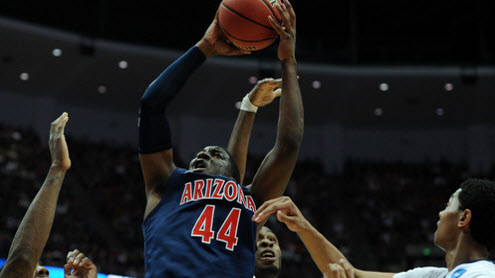 The No. 11 seeded Belmont Bruins finished 26-6 and 14-2 in the OVC behind the strength of a team that falls into the “live and die by the three” label that we often hear applies to teams in March Madness. That makes them a dangerous team to upset the Arizona Wildcats, who finished 25-7 and 12-6 in Pac-12 play.

Arizona concluded their season by losing three of their final five games, including a loss to No. 21 UCLA in the Pac-21 tournament on March 15. In that contest, the Wildcats lost by just two points, though the Wildcats had four players in double figures. They were led by Brandon Ashley’s 7-of-8 shooting off the bench, as Ashley posted 15 points in 25 minutes. Ashley is the fifth leading scorer and averages 7.7 points per game and 5.3 rebounds.

The Wildcats are led in scoring by Mark Lyons (14.8 points per game) and Solomon Hill (13.4). Hill, a 6’7″ senior forward, leads the Wildcats in minutes per game (33) and though his efficiency has decreased from last season, the Wildcats are 10-2 when Hill scores 15 points or more in a game.

Belmont features a strong starting five, which features all but Blake Jenkins (9.7) in double figure scoring. Ian Clark is one of the best shooters in the nation, and he hit 46.3 percent from behind the arc en route to a team leading 18.1 point per game scoring average. Clark is a 6’3″ senior and the Bruins are 15-4 when Clark hits at least three point field goals in a game.

Belmont: OVER is 8-1 in Belmont’s last 9 Thursday games.