Posted on August 29, 2013 by Brett David Roberts in College Football,Headlines 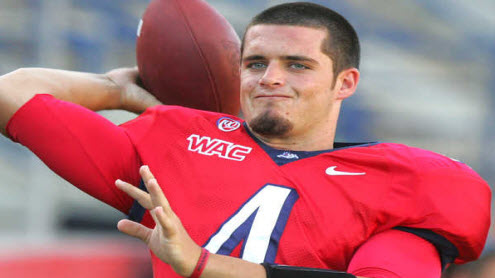 The Fresno State Bulldogs went from laughing stock to legit really quick when Tim DeRuyter took over last season. After finishing just 4-9 in 2011, the team fought its way to a share of the Conference title last season in the Mountain West. QB Derek Carr was a huge part of DeRuyter’s success, and the team was very strong offensively, leading the MWC in both scoring and total yardage. Carr won the Offensive Player of the Year award in the MWC and he is ready to try to step it up another notch in his senior season.

The defense also returns eight starters and they were good last year, too. The Bulldogs held opponents to 23 points per game and forced 35 turnovers. The Bulldogs have a very real chance at hosting the first MWC title game this year, and it would be historic to Fresno State to take it.

But the stops begin Week One against Rutgers. The Scarlet Knights finished 9-4 last season and finished in a tie for the Big East with a 5-2 record. The team began 9-1 last season and they’re hoping they can avoid the second-half collapse that marred last season. For that to happen, Gary Nova is going to have to be far better, as he threw 13 interceptions in the final six games. Nova has some gifted receivers, not the least of which is Brandon Coleman, one of the best athletes in the country. He grabbed 43 passes last year for 718 yards and scored 10 TDs.

The Rutgers defense would stand a much better chance of slowing Fresno State’s potent attack had they not lost Khaseem Greene, a two-time Big East DPOY. Greene may have been the best defensive player in Rutgers history, and Kevin Synder will have to do the best he can as his replacement. Snyder played inside linebacker last year and had 136 tackles, but his flexibility could also render him playing some middle linebacker, too.

The Scarlet Knights have a good team, but college football oddsmakers seem impressed by Fresno State’s turnaround last season, setting the line over a touchdown in favor of the small conference school. The O/U in this one should be intriguing with both teams offering plenty of chances at scoring and a precariously low 54.5 point total.

Be sure to check out Maddux’s College football pick plans as we line bettors’ pockets once again this season!