Posted on October 26, 2013 by Brett David Roberts in College Football,Headlines 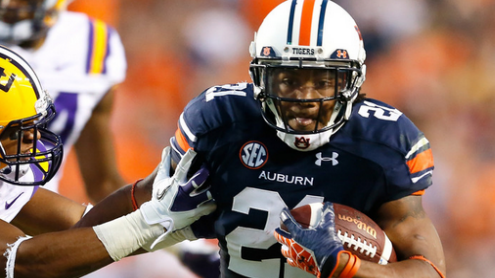 Auburn won 45-41 over then-No. 7 Texas A&M last week, and the win helped the Tigers move up to No. 11 in the nation in the AP polls this week. The Tigers will host a hapless 2-5 Florida Atlantic team that is a 24-point underdog according to college football oddsmakers at Bovada.

The Tigers have one of the best rush offenses in the nation and bolster a strong enough defense to make the equation work, holding opponents to just 22 points per game (31st best in the nation). The Tigers average 300.1 rushing yards per game, and divide the workload between QB Nick Marshall, Tre Mason, Cameron Artis-Payne and Corey Grant. Mason leads the team in total rush yardage with 693 yards on the season, and he also leads the way in TDs (8). Marshall has had decent success as a passer with 57.3 percent of his throws for completion and 1,138 yards on the season. The pass game is just effective enough to add variation to the rush attack, and the Tigers are a very solid team.

Florida Atlantic has posted decent defensive stats, but the team has not faced very good opponents. The only ranked school it faced was Miami (before the Hurricanes gained ranked status, too) and the Owls gave up 34 points, in a lopsided 34-6 loss. Auburn has every chance to put up that kind of point total against the Owls, and the Florida Atlantic offense isn’t all that potent. Florida Atlantic ranks 83rd in the nation in passing yardage and 72nd in rushing yardage and the team generates just 22.3 points per game.

Jaquez Johnson has been a good QB when he’s avoided mistakes. Though he has five interceptions on the season, Johnson has thrown 60.6 percent for completion and he has a QB rating of 120.0. The Owls main two receivers both average big yardage per catch, with William Dukes (13.5 yards per catch, 337 yards) and Daniel McKinney (10.3 yards per catch, 328 yards) having great seasons. Johnson has also rushed for 341 yards with a team high five rushing TDs. The Tigers “D” will have to key carefully to prevent Johnson from making big plays, because he’s the best thing the Owls have going for their 2-5 squad.