Posted on October 21, 2018 by Brett David Roberts in Headlines,NFL 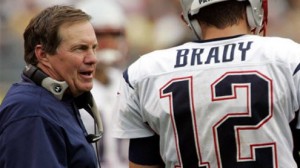 The New England Patriots have won three-straight and this week will visit the Chicago Bears as 1-point favorites in a Noontime clash on CBS. The over/under is set at 48 points according to NFL oddsmakers at bookmaker 5dimes.

Last week, the Patriots handed Pat Mahomes and the Kansas City Chiefs its first loss, escaping with a 43-40 victory at home. The Patriots take to the road this week where the team is 0-2, and it will seek its first road win against a somewhat surprisingly good Bears team. New England ranks No. 4 in the league in scoring at 29.3 points per game, while its defense holds opponents to 24.7, good for a positive-4.6 point differential. The Patriots have relied on its rush attack more this season, which ranks No. 11 in the NFL at 123.0 yards per game. Tom Brady has headed a passing offense that ranks No. 18 at 258.2 yards per game.

Brady has thrown for 1,599 yards at a 67.8 percent clip, and he has 13 TD passes to go with six interceptions. He has been sacked eight times for a total loss of 50 yards, and Brady has not been effective via the rush, with 11 attempts for just 15 yards, though six rushes have been for first downs. Sony Mitchel carries most of the load in the backfield, and he has rushed for 400 yards on 91 attempts with four rushing TDs.

James White has chipped in 149 yards and a 5.1 yard-per-carry average, which leads New England. Rob Gronkowski has arguably been the MVP of its offense, with the tight end leading the team in receiving yardage (405). White functions better as a receiver than a running back, having run many short routes and caught a team-high 37 passes for 323 yards and a team-best four touchdowns. The Patriots have five other players with 100 or more receiving yards, and it has scored 13 passing TDs (though its defense has surrendered 15 thus far).

New England is the same tough team, but it will need to slightly improve its pass attack while also providing Mitchel with some better blocking and hole-creation. Expect the Patriots to continue to round into form, which is scary considering the team is a healthy 4-2 without having played its best football, probably.

The Chicago Bears are 3-2 on the season but a perfect 2-0 at Soldier Field thus far. It is tied with the Green Bay Packers and Minnesota Vikings for the NFC North lead. In the last outing, the Bears fell 28-31 to the Miami Dolphins, but it won its three prior matchups against Seattle, Arizona, and Tampa Bay.

Bears quarterback, second-year Mitchell Trubisky, has really come into his own in his sophomore season. He has 1,261 yards on 70.2 percent passing with 11 TDs and four interceptions. He has already incurred 12 sacks for a total loss of 80 yards, but his 2.5 percent interception ratio is a huge improvement this season. The Bears have four receivers with 199 yards or more on the season, and it has scored 11 TD receptions.

Taylor Gabriel leads the team with 27 receptions and 303 yards, but Allen Robinson leads in first downs (15) and is second in yardage at 281. Jordan Howard leads all running backs with 272 yards, but he has managed just 3.5 yards-per-attempt, and the Bears average just 4.4 as a team. Trubisky has been the most successful per-attempt, with 25 carries for 164 yards and a touchdown. He has also rushed three times for 20-plus yards, which leads the Bears.

Chicago is definitely pleased with its draft pick at QB, but it is going to have to get more production from Howard. No. 2 back Tarik Cohen is averaging 5.3 yards-per-carry but has attempted just 32 rushes to Howard’s 78. It is mostly an issue with the playcalling, with Mitchel being given so many short-gain plays. But milking more yardage remains a priority for him.