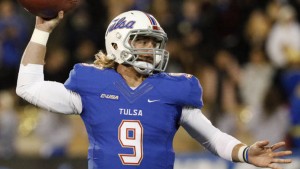 Colorado State is off to a 3-1 start, but lost its lone Mountain West matchup to Boise State, 37-24. The Rams have defeated the likes of Colorado, Boston College and UC-Davis and enters this week’s game as 18-point favorites over Tulsa.

The Rams have ranked 18th in the nation in passing yardage with 322 per game. Its rush hasn’t been bad either, with 170 yards (67th in nation) per game.

QB Garrett Grayson suffered a shoulder injury last week, but he should be able to go this game. He’s in his senior season, and last year he threw 62.1 percent completion on 3,696 yards. This year, he’s been good for 60.8 percent and has a higher yards per attempt, with 8.2 per game. He’s thrown 10 TDs to just four INTs, and has only been sacked five times this season. His high-yardage game came in the lone loss to Boise State, as he threw for 434 yards but had two INTs to his three TDs.

Grayson’s top receiving target has been Rashard Higgins, who has 404 yards and a 14.4 yard per reception average. He’s caught four of the Rams’ 10 receiving TDs. Five other receivers have at least 100 yards on the season for Colorado State. RBs Dee Hart and Treyous Jarrells have rushed for a combined 562 yards and both boast per carry averages of over 6.0.

Tulsa opened the season with a conference win over Tulane in Double-OT. Since that strong start, the Golden Hurricane have lost three straight matchups, and only one of them was close (37-34 3 OT loss to Texas State). Both then- No. 4 Oklahoma and even Florida Atlantic managed 50-plus points against one of the worst defenses in the nation. Tulsa allows 42.5 points per game this season.

The pass attack has been solid for the Golden Hurricane. Sophomore QB Dane Evans has thrown 54.6 percent for completion and has 1,145 yards on the season. His 8 TDs to 7 INTs are troubling, as are his 11 sacks, but the Golden Hurricane don’t generate much via the rush. No Hurricane back has more than five yards per carry (minimum 10 carries).

Keeven Lucas has been Evans’ main target and has 439 yards on the year, including an 84-yard TD reception, one of his five TD catches this season. No. 2 WR Keyarris Garrett has caught 314 yards with a team-high 15 yards per reception, but he hasn’t accounted for a single TD this season. Junior WR Conner Floyd has just 11 receptions on the season, but three have been for a TD.