Posted on October 6, 2018 by Brett David Roberts in Headlines,NFL 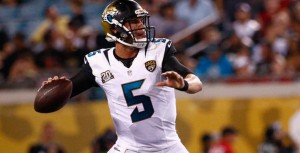 The Jacksonville Jaguars improved to 3-1 with its 31-12 victory over the New York Jets in Week 4. This week it travels to face the red-hot Kansas City Chiefs as 2.5-point underdogs. The game will air at Noon on CBS, and it has an over/under set at 49 points according to NFL oddsmakers at bookmaker 5dimes.

Jacksonville is hoping it has the speed to match Kansas City this week.

It brings a quick defense to the field that it feels it can help slow the ultra-quick moves of Tyreek Hill and Sammy Watkins. But, of course, all eyes will be on quarterback Patrick Mahomes.

The cannon-armed rookie has already reached 1,200 yards on the season with a 65.2 percent completion ratio, 14 touchdowns, and not a single pick to his name. He has been sacked five times for a total loss of 11 yards but has a 10.1 percent TD ratio and a 126.5 passer rating.

Simply, he has been sensational.

Jacksonville will try to put the pressure on him, but miscues are rare from this rookie. Hill has already caught 23 passes for 364 yards and three touchdowns, and Travis Kelce has caught 23, as well, with 307 yards and three TDs. The pair has 27 first downs between them, and Watkins has rushed just three times for 51 yards while having caught for 176 yards and a TD. Hunt has been the top backfield performer with 71 rush attempts for 289 yards and three TDs, with no fumbles and 17 first down runs.

The Chiefs just get it done offensively, and it has led to nothing but wins for the young quarterback and his team, with plenty of talent at all of the skill positions and the offensive line to open up the opportunities. Mahomes has rushed 18 times for 53 yards and a TD, as well as having picked up five first downs via the rush. Kansas City leads the NFL in scoring at 36.3 points per game, with a No. 9 ranked pass offense at 297.3 yards per game. It is tied-for 13th in rushing yardage with 113.0 per game. The Chiefs have been mediocre defensively, but it has not mattered much with the magic of Mahomes. Kansas City is surrendering 28.8 points-per-game but still has a +7.5 point differential. And it leads the AFC West through four weeks of football.

The Chiefs will have a tough upcoming few games against New England, Cincinnati, and the much-improved Browns, but Mahomes should be guiding this team to a postseason berth if it can avoid any major injuries throughout this season. With the league’s top offense only getting better on a weekly basis, a lot of bettors are getting behind the Chiefs for a title run this season.

The Jacksonville Jaguars are 3-1 after knocking off the Jets 31-12 last week. But it now faces its toughest defensive challenge of the season, after holding its past two opponents (one in a loss) to a combined 21 points. Jacksonville, despite having lost, leads the NFL in defense— holding opponents to just 14.0 points per game. And its offense is not bad.

The Jaguars rank just No. 22 in scoring at 22 points per game, but it possesses a balanced attack that is actually a little underrated. It is No. 16 in passing yardage at 266.5 per game and No. 12 in rushing yardage at 113.5 per, and quarterback Blake Bortles has been much-improved and overall, quite decent.

The UCF product has thrown for 1,095 yards on 64.7 percent passing with seven touchdowns and three interceptions. He has suffered six sacks for a total loss of 29 yards, but still boasts a 93.6 passer rating and he has been backed by TJ Yeldon as the No. 1 back.

Bortles has 132 rushing yards of his own, averaging 7.3 yards-per-carry on his 18 attempts, while Yeldon has rushed for 205 yards and the only rushing TD the Jags have. Meanwhile, it has scored seven TDs via the pass, with Donte Moncrief and Yeldon both having two TD receptions on the season apiece. Dede Westbrook has caught 21 of 28 targeted passes for 294 yards and leads the team with 14 first downs.

Keelan Cole has 225 yards, Moncrief is good for 173, and Yeldon has 125 coming out on option plays. The Jags average 11.3 yard per pass attempt and boast five players with 10 or more catches on the year. This game should be a great showcase of two young quarterbacks, but it is hard to bet against Kansas City as perhaps the chic pick of the league with what Mahomes has done and is capable of.