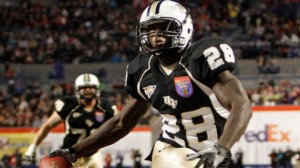 The No. 13 ranked UCF Knights are 3-0 after last week’s victory over in-state rival FAU. This week its attention turns to conference-foe Pittsburgh as it hosts the Panthers at 2:30 PM (CT) on ESPNU. UCF enters as 13.5 point favorites in a game with an over/under of 64.5 points according to college football oddsmakers at bookmaker 5dimes.

UCF, thus far, has been nearly unstoppable offensively. The Knights rank No. 9 in the nation in scoring (50.0 points per game) while maintaining a top-30 defense. It is a formula that led the team to an undefeated season a year ago, but now the Knights are focused more heavily on earning respect from the AP and earning its way into the FBS playoffs. Can it be done with such a soft schedule? UCF faces no top-25 opponents the entire season, and stomping through the AAC was not a year ago. Perhaps these are topics for another day, another article, but UCF is focused on much more than simply winning, but winning in such convincing fashion that it can find its way into the NCAA postseason.

That said, it should have little problem against Pittsburgh. Quarterback McKenzie Milton is one of the best at the collegiate level, with 895 yards already to his credit, nine touchdowns, and a 160.1 passer rating. Milton threw for 4,000-plus yards last season with 37 touchdown passes to his nine interceptions.

While his completion percentages and yards-per-attempt linger behind last year’s outstanding marks, he remains the primary cause behind UCF’s dominant pass offense. The Knights are also not short of players at the skill positions, with four receivers topping 100-yards through three games, and lead running back Adrian Killins averaging 5.8 yards-per-carry and having scored three touchdowns.

Milton is quite a rusher himself from the QB position, averaging 6.4 yards-per-carry and a team-tying best three TDs, as well. There are just so many ways the Knights can slice up a defense, but not facing the top defenses in the country remains something that—for the moment—is beyond the control of the program’s players and coaches. Expect UCF to come out against Pitt with an emphasis on running the score up, making the less-than-two-touchdown line seem even precarious. UCF averages 13.2 yards per pass attempt and 6.4 per rush, and Pittsburgh possesses a mediocre defense, at best.

Pitt gives up 28.8 points per game, ranking No. 85 in the nation, which would hardly be as bad if the Panthers possessed an outstanding offense. It does not. Pitt is scoring just 25 points per game ranking No. 99 in the nation, and it was held to just six points in its loss to No. 13 Penn State in Week 2. The Panthers also surrendered 38 points to North Carolina last week. The defense was more than adequate in its two wins, but those came against Albany State and Georgia Tech—two programs which are hardly powerhouses.

Quarterback Kenny Pickett is throwing 62.5 percent for completion but has thrown three interceptions already to his four TDs, and he also averages just 6.4 yards per attempt. Qadree Ollison has been the brightest spot for the Panthers offense, leading the team in rushing TDs (4) and in total yards (355).

Pickett does a fair job rushing out of the pocket, with 3.3 yards per attempt and 117 yards on the year, but having a decent offense is not quite enough with a poor defense, and Pitt will find itself biting off far more than it can chew in playing the quite disputed national champs from a year ago. Well, at least UCF refers to its own programs as the national champions— howsoever many people may mock it for doing so.