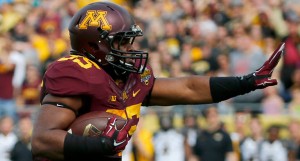 The Minnesota Golden Gophers stand at 3-0 after having knocked off Buffalo, Oregon State and Middle Tennessee, but now the Gophers enter the Big Ten schedule. Its first conference game has it traveling to face Maryland as 13-point favorites at 11 AM (CT) Saturday on Fox Sports 1. The over/under is set at 43.5 points according to college football oddsmakers at bookmaker 5dimes.

It is tough to withdraw a lot of meaning from Minnesota’s first few contests, all were against sub-par programs that the Golden Gophers scarcely encountered any problems with. It won the first three weeks by a combined total of 99-24, and none of its opponents posed any sort of threat.

Quarterback Conor Rhoda was solid with 30 of 46 passing through three games, amassing 456 yards and two touchdowns, with one interception. It was the Gophers backfield that really smashed its opponents, with Rodney Smith rushing for 275 yards through three games and its No. 2 and No. 3 backs both racking up over 100 yards on the season, as well.

The Gophers also have gone to the ground when in the red zone, with nine rushing TDs to its mere two receiving TDs on the year. Shannon Brooks leads the team with four rushing touchdowns on year; and, the junior rushed for 650 yards last year and 709 in 2015 as a freshman. While his freshman year was his best thus far (6.0 yards per attempt), he could be just starting to scratch the surface of what he is capable as a third-down back this season.

In 2015, he had 17 catches for 167 yards, but this year has just seen two for 10 total yards. Seeing Minnesota involve him as a dual-threat running back again could be the next step for its offense this season. He had 91 yards on 17 attempts against Oregon State, including a long rush of 17 yards while scoring three touchdowns.

Minnesota will look to attack Maryland’s front five frequently with the rush, and to vary it up Rhoda should be good for a number of middle-range pass plays. Expect Minnesota’s offense to have plenty of success against a Terrapin defense that gave up 38-points last week to the UCF Knights.

Maryland won impressively in Week 1 over a ranked Texas team 51-41, and it destroyed Towson in Week 2, but last week’s failure against UCF speaks loudly as to just how inconsistent this Terrapin team really is, and has been. Maryland surrendered 250 rushing yards to the Knights while managing just 42 rushing yards of its own. Its pass offense was also weak, for though Max Bortenschlager threw 15 of 26, he was good for just 5.1 yards per reception and launched two picks and managed only one touchdown.

Maryland had only 197 total yards against UCF, and the Knights are hardly any defensive powerhouse.

Maryland will hope that Ty Johnson is enough to sway things in its favor, though. Johnson has averaged 10 yards per rush attempt with 281 yards and three TDs on the season. Kasim Hill has been deadly accurate at QB, too, with 230 yards on 18 of 21 passing, but he scarcely played last week despite throwing 2 of 2, because he tore his ACL and is now out for the season. This came after already losing Tyrell Pigrome in Week 1. So, with its third-string quarterback now saddling up for the season, expect some major disappointment.