Posted on September 17, 2016 by Brett David Roberts in College Football,Headlines 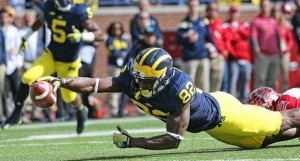 The Colorado Buffaloes won Weeks 1 and 2 by a combined score of 100-14 over Colorado State and Idaho State. Week 3 promises to bring a bit more of a challenge with Big Ten powerhouse Michigan hosting the Buffaloes for a 3:30 (ET) showdown.

College football oddsmakers at 5dimes set the line 18-points in favor of the Wolverines.

Colorado has put up no shortage of numbers in its two lopsided ‘Ws.’ Sefo Lirufau has thrown 38 of 51 (74.5 percent) for 522 yards and three TDs, while backup Steven Montez is 6 of 10 for 117 yards and two TDs. The Buffaloes have 653 passing yards on the season and 552 on the ground. Leading rushers Phillip Lindsay and Liufau have both rushed for over 120 yards with 47 of Colorado’s 113 carries split between them. Kyle Evans has also rushed 23 times for 93 yards and the Buffaloes have scored eight rushing TDs on the young season.

Shay Fields, Devin Ross and Bryce Bobo have all caught better than 100 yards on the season and Ross has two of the Buffaloes’ five receiving TDs. There are eight receivers with at least two catches to their name, and Michigan’s secondary will represent the first real test for this group.

No. 4 ranked Michigan plowed through lowly AAC opponent UCF 51-14 in Week 2 and it defeated Hawaii 63-3 in Week 1. Last week, QB Wilton Speight threw 25 of 37 for 312 yards and four TDs, as Michigan amassed 328 passing yards on the game. The Wolverines picked up 119 rushing yards on 41 carries, managing just 2.9 yards per carry. De’Veon Smith led the team in yardage with 38 yards on 10 carries, but it was Khalid Hill who got the red zone touches, rushing for two TDs on his five attempts. Speight was ineffective in his two carries, losing 12 yards on that pair of attempts.

Speight is 35 of 50 on the season for 457 yards and seven TDs with just one pick. His passer rating is 189.0 and he has three WRs who have all benefitted immensely. Amara Darboh, Jehu Chesson and Jake Butt have combined for 23 catches and 385 yards on the season, with six TDs between them (Darboh and Butt, 3). Darboh is a 6’2” 215 pound senior who caught for 727 yards on 58 catches last season, with five TDs on the year. He is going to eclipse that by mid-season if he continues to be the red zone target he has been for Speight.

Chris Evans has been the most effective rusher and most consistent. Evans has 147 yards on 17 carries for an 8.6 yard per attempt average, while Smith, Ty Isaac and Karan Higdon have all rushed for 12 times or more but none average more than five yards per. The Wolverines average 5.3 yards per rush as a team, and Michigan has six rushing TDs on the season.