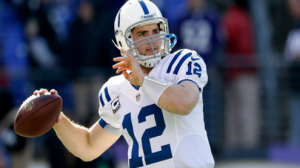 The Washington Redskins began its season last week with an opening victory on the road against the Arizona Cardinals. Washington won 24-6, to start its season off on the right foot before heading home in Week 2 to face the Indianapolis Colts at home. The Redskins are 6-point favorites in the game, which has an over-under of 48 points and will air at Noon (CT) on CBS.

Week 1 saw Redskins QB Alex Smith complete 21 of 30 passes for 255 yards and two touchdowns. Smith was sacked three times, but lost only eight total yards on those sacks, and he remained interception-free through one week, as well. Adrian Peterson rushed for 96 yards but required 26 carries to do so (3.7 yards per), though he did have a long run of 17-yards while also scoring a TD. Chris Thompson rushed for another 65 yards on only five attempts, averaging 13 yards per carry and having a nice day for himself. Smith was good for 14 yards on eight attempts, as the Redskins tallied 182 total rushing yards for a total offensive output of 438 yards in the game.

Peterson also did work as a receiver, managing 70 yards on his two total catches, while Chris Thompson and Jordan Reed each had 63 and 48 yards, respectively, and both scored a TD. The Redskins defense was also impressive. It forced an interception from Sam Bradford while also forcing a fumble at the hands of Bradford, which the Redskins recovered. Arizona had four sacks and four tackles for loss, with two of the sacks coming from Matt Loannidis and Peterson, too. Peterson put on a monster performance, quelling any and all doubts that the megastar is on any sort of decline: His rushing performance, receiving, and even the rare defensive play was all on display as he bailed the Redskins out and helped knock off Arizona by a full 18-point difference.

The Indianapolis Colts lost 34-23 to the Cincinnati Bengals in Week 1. Andrew Luck completed 39 of 53 passes for 319 passing yards with two TDs, but he did throw one interception and the Colts’ rushing game was poor, at best. Indianapolis gained just 75 yards on 22 attempts, with no one reaching the end zone via the rush. WR Jack Doyle caught 7 of 10 targeted passes for 60 yards, including a long catch of 13-yards, but it was Eric Ebron and T.Y. Hilton who scored the Colts’ two receiving TDs.

Defensively, Indianapolis did a decent job, but the Bengals were efficient from within the red zone which offset its turnovers. Joe Mixon had 95 yards for Cincy on 17 attempts, scoring one TD against the Colts’ defense, while AJ Green damaged the Indy secondary for 92 receiving yards and a TD. The Colts will have to do better still against a more powerful Falcons offense to avoid beginning its season on a 0-2 note.