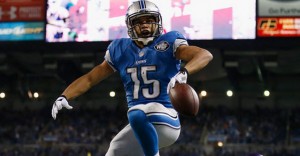 The Tennessee Titans fell 25-16 to the Minnesota Vikings in Week 1 NFL action. Marcus Mariota threw 25 of 41 for 271 yards with two TDs and one interception, posting a QBR of 52.6 and a passer rating of 86.5. He also rushed for 19 yards on four carries.

“When he’s in command and running things, he puts a lot of pressure on the defense. He doesn’t give them much time. And he’s been very, very accurate. When things are a bit spread out, he spreads it around,” Jim Caldwell said of Stafford.

The Titans did have trouble getting offense on the ground, though, managing just 64 rushing yards as DeMarco Murray led the way with 42 yards on 13 carries (just 3.2 yards per carry).

Wide receiver Tajae Sharpe caught seven passes for 76 yards and five Titans’ receivers finished with at least 30 yards in the game. Both Titans’ TDs came via the pass, too, with Murray catching both (five receptions, 35 yards). Murray and Andre Johnson were each targeted seven times.

The Detroit Lions defeated the Indianapolis Colts 39-35 in Week 1. Matthew Stafford was sensational, with 340 passing yards on 31 of 39 passing for three TDs and no interceptions. Marvin Jones caught four passes for 85 yards, though he was targeted a team-high 10 times.

Theo Riddick, Ameer Abdullah and Eric Ebron all caught five passes apiece. The Lions also got 116 rushing yards, mostly from Abdullah, who rushed 12 times for 63 yards. Riddick had seven carries for 45 yards and a TD, and Dwayne Washington scored the other TD on a one-yard goal line rush. The Lions’ backfield is versatile, and Abdullah and Riddick both function well in a lot of different sets.

The Titans may have the defense necessary to counter Riddick and Abdullah. Tennessee held Adrian Peterson to just 31 yards on 19 carries, and though Detroit can keep coming with that tandem of high-powered running backs, DT Jurrell Casey and LB Wesley Woodyard are both superb run stoppers. The Titans’ defense may be underrated.

The Titans held Minnesota scoreless in the first half last week, but the offense cannot afford to give up turnovers the way it did. Tennessee needs to find a way to force turnovers, as it did not last week against Shaun Hill. The Lions’ OL is led by C Travis Swanson and T Riley Reiff, and if they can provide Stafford the protection Detroit should be able to get Golden Tate and Marvin Jones off.