Posted on September 6, 2019 by Brett David Roberts in College Football,Headlines 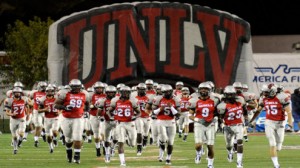 The UNLV Rebels won 56-23 over Southern Utah in Week 1. Arkansas State lost 30-37 to SMU in Week 1. Week 2 sees the teams collide with the Rebels 1.5-point favorites at home over Arkansas State. The betting total is 63.5 points according to college football oddsmakers, and the game will kick-off 9 PM CST Saturday.

Arkansas State got 32 of 50 passing for 324 yards with four touchdowns and one interception from quarterback Logan Bonner. Bonner rushed six times for 16 yards, and Marcel Murray rushed 17 times for 77 yards. Arkansas State had 414 total yards of offense, but it surrendered 508 total yards to SMU. SMU had a costly interception and it was limited to 3.3 yards-per-carry on its 45 attempts.

Omar Bayless led the Red Wolves in receiving with 132 yards on 10 catches and all four of the team’s receiving touchdowns. Brandon Bowling added another team-high 12 catches for 92 yards, and No. 3 receiver Jonathan Adams Jr had eight catches for 84 yards. Arkansas State averaged 10.1 yards-per-pass, with three receivers having catches of 20-yards or more.

UNLV quarterbacks Armani Rogers and Kenyon Oblad combined to throw 18 of 28 for 203 yards with one TD and no picks. Rogers rushed for 114 yards on 11 carries, as well, with two rushing TDs. Charles Williams rushed a team-high 15 times for 143 yards and three TDs. UNLV picked up 331 rushing yards in the game and averaged 7.4 yards-per-carry on its 45 attempts. The Rebels did give up 295 passing yards to Southern Utah, but it limited the Thunderbirds to just 46 rushing yards and a futile 1.2 yard-per-attempt average.

UNLV had five receivers with at least two catches and 24-yards or more on the game. It averaged 11.3 yards-per-completion and all five of the top receivers had catches of at least 14-yards or greater.

UNLV’s defensive effort was headed by Evan Austrie and Rayshaud Jackson. Austrie had nine tackles, including seven solo, one for loss, and a sack. UNLV’s defense had four sacks and nine tackles-for-loss in Week 1.