Posted on September 8, 2018 by Brett David Roberts in College Football,Headlines 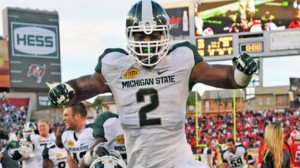 The No. 15 ranked Michigan State Spartans narrowly avoided defeat in Week 1, knocking off Utah State by a mere touchdown, a victory that equated to the Spartans losing four spots in the AP Rankings after entering Week 1 as No. 11 ranked.

Connor Heyward scored his second TD with two minutes to go to eke out the victory, and now MSU travels to face Arizona State as 5-point favorites in Week 2 action at 9:45 PM (CT) on ESPN. The over/under is set at 54 points according to NCAA football oddsmakers at 5dimes.

Michigan State played a strong offensive game in Week 1. QB Brian Lewerke threw 23 of 33 for 287 yards, two touchdowns, and one interception. LJ Scott did his job from the backfield with 84 yards on 23 carries (just 3.7 yards -per-carry, though) while the Spartans rushed for 165 total yards and two TDs. Cody White was the top receiving target, with the second-most catches (5) and a team-leading 70 receiving yards. Felton Davis III contributed another 69 yards on his three catches, as he scored a touchdown. Both White and Davis were the only receivers to reach the end zone.

The issues were stopping Utah State’s air assault. USU QB Jordan Love threw 29 of 44 for 319 yards, but he did not throw a TD and the MSU secondary picked off two of his passes. If not for those costly mistakes, the Aggies probably could have and would have upset the Spartans in Week 1. MSU will need to fine tune a lot of secondary issues in its defense to hold its own this week against Arizona State.

Arizona State won its Week 1 matchup 49-7 against UTSA. The Sun Devils got a nice game from QB Manny Wilkins. He threw 16 of 24 for 237 yards with four TDs and no picks. Eno Benjamin rushed nearly half of ASU’s ground yardage, with 131 yards on 16 carries and a TD. Isaiah Floyd ran for another 79 yards on nine carries and a TD. Wilkins was mildly effective rushing from the pocket, picking up 28 yards on six carries (4.7 yards per rush).

ASU went mostly to N’Keal Harry at WR. He caught six passes for 140 yards, while the rest of his receiving corp contributed just 10 catches for 97 yards. Harry averaged 23.3 yards per catch, while his teammates averaged 9.7. While Wilkins certainly has a fresh target in Harry, he will have to look to get Frank Darby and Benjamin more involved in Week 2.

Also to ASU’s credit, it was able to recover two fumbles by DJ Gillins and Cordale Grundy, which in addition to the two interceptions, helped swing the game so heavily in the Sun Devil’s favor. Creating turnovers has been an emphasis of the defensive coordination and it seems the Sun Devils may finally be cashing in on that, though a victory over UTSA was expected, and perhaps the turnovers were too. It is simply something to keep an eye on in this Week 2 matchup because ASU easily could pull an upset with a fumble or two going its way this week.