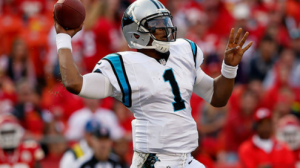 The Carolina Panthers are starting to get back to relevancy after making a return to the postseason in 2013-14. The team parted ways with Steve Smith this offseason, and he’s likely going to comeback to destroy the Panthers with reckless abandon in week 4.

Cam Newton had ankle surgery over the offseason, and he needs to improve the offense, because Carolina’s D will keep them in games this season.

The Tampa Bay Buccanneers begin the Lovie Smith era as 2-point favorites at home against Carolina, though. Tampa Bay is hoping Smith’s experience with the Bears translates, as he tallied an 84-66 record in nine seasons. The Bucs are given 66/1 odds to win the Superbowl and are +550 to win the NFC South.

Last season, Tampa finished 4-12, and Josh McCown is about the least inspiring QB option in the NFL. He’s played 12 NFL seasons and started just two, while boasting a 1:1 TD/INT ratio. He performed well in five starts with the Bears, posting a 109.0 passer rating, but that kind of small sample theater really does nothing for predicting sustained success.

Doug Martin had a tough sophomore campaign after making the Pro Bowl his first NFL season. He managed just 3.6 yards per carry last season before suffering a season ending shoulder injury. In his first season, he drew high praise and a lot of heady comparisons to great NFL backs. The team’s success is highly dependent on him being that player, and not the middling threat he was in his shortened year last season.

The Bucs made a good signing hiring Smith to coach this squad, but the turnaround can’t happen in one offseason. McCown’s limitations cast a lot of shade on this team and the Bucs are going to need to capitalize on the softness of its early schedule.

Carolina led the NFL in sacks last season with 60 and was behind only Superbowl Champion Seattle for the fewest yards and points allowed. The defensive line is sensational and is probably the best in the NFL. The secondary is Carolina’s only weak spot defensively, but Roman Harper and Thomas DeCoud have both made Pro Bowls at safety.

The Panthers return the nucleus of a very strong defense and successful team last season, and while not having Smith around anymore may hurt some in theory, it was necessary for the team to give Cam the reigns and not feel pressured to submit the ball to Smith’s hands.

Newton’s health is absolutely crucial, but this has a good chance to be one of the small upsets this week. Carolina is a better team and Tampa Bay is undergoing a lot of transitions all over the field. It just seems like the recipe for a road underdog win, though a two-point spread hardly tilts the odds much in favor of the Bucs at any rate.