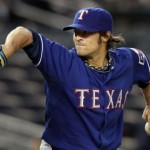 Twins starting pitcher Brian Duensing is 7-1 with a 1.92 ERA in 45 appearances (six starts) this season and has led the team to three consecutive victories.  Over those three outings, he has allowed just five runs (four earned) and 19 hits over 24.1 innings of work.  The left-hander is a perfect 3-0 with a 2.42 ERA in 22 road outings (four starts) away from Target Field this year, allowing opponents to hit for just a .227 average.  In four career games (one start) versus the Rangers, he has posted an even 1-1 mark and 1.74 ERA, including a scoreless inning of relief on May 29.  He has made four starts this month, producing a perfect 3-0 record and 2.08 ERA, while giving up just 23 hits in 30.1 frames.

Texas holds a commanding 8 1/2-game lead over the Oakland Athletics in the AL West division and has an opportunity to win four games in a row since producing an 11-game winning streak from June 12-24.  Captain Michael Young has been very pleased with his club’s effort against one of the more fundamentally sound teams in baseball.  “They are  a club that plays the game hard and plays the game the right way,” Young said.  “We like the style of baseball we play – we’ve just got to stick with it.”  The Rangers are 41-23 in Arlington in 2010 (+120) and rank second in the majors at home in both batting average (.294) and runs scored (347).  The club is 20-18 versus southpaw hurlers this year (-290) and the total stands at 13-23 O/U in those contests.

Rangers starting pitcher C.J. Wilson is 12-5 with a 3.02 ERA in 25 starts this season and has watched the club win seven straight games with him on the hill.  He’s 5-0 in seven starts since the All-Star break and came a single out away from a complete game  victory over the Baltimore Orioles on Friday.  The left-hander currently leads the staff with 12 wins and has logged 158 innings, which are both personal career highs.  Wilson has compiled an 0-2 record and 3.41 ERA in 18 games (one start) versus the Twins, including taking a loss in his lone start against them on May 29 at Target Field.  Overall, he has held opponents to three earned runs or less in 14 of his last 15 outings.

Bettors will be interested in knowing that the Twins are just 10-23 in their last 23 games as a road underdog, with the under cashing four straight times in that situation.  Texas has garnered an impressive 15-2 mark in Wilson’s last 17 starts as a favorite, but the club has lost four straight to opposing southpaws.