The Angels look to avoid dropping to .500 this late in the season in over seven years and seek their first victory of the season against today’s opponent. 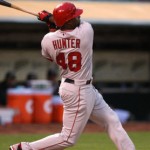 Boston moved its current road trip record to 5-4 and will finish the 10-game West Coast journey this afternoon, after picking up a 4-2 victory over the Angels last night at Angel Stadium.  “We just need to win games right now,” Tuesday night starter John Lackey said.  “We’re in a tough division.”  The Red Sox had dropped 12 of 18 games earlier this month due to an assortment of injuries, but the team has had five players return from the disabled list in the last past week.  The club is a perfect 6-0 against the Halos this season and 37-31 in this series since the start of the 2003 season.  This contest will be the final of 14-straight games against the AL West, with the Sox coming in with a 14-9 record versus the division.  Boston has compiled an even 61-61 daytime record over the last three years (-1,530), but stand at an 8-16 mark in 2010 (-1,280).

Red Sox starting pitcher Josh Beckett is an even 1-1 with a 6.66 ERA in nine starts this season and will be making his second start since returning from the disabled list.  On July 23 in Seattle, he led the club to a 2-1 victory, allowing just a single run and five hits over 5.2 innings of work.  He is 1-0 with a 5.60 ERA in five road starts, as opponents are hitting for a combined .301 average.  Beckett will be toeing the rubber for just his second daytime start, giving up two runs and six hits over seven frames under the sun this season.  He will be making his first start of the year against the Angels and hasn’t defeated them in the regular season since April 16, 2007.  Over that span, the right-hander is 0-3 with a 4.89 ERA in five starts.

Angels starting pitcher Joel Pineiro is 10-7 with a 4.18 ERA in 20 starts this season, but is coming off one of his worst outings of the year.  He suffered a 10-6 loss against the Yankees on July 21, giving up six runs and 11 hits over six frames.  “Against a potent lineup like that, they’re going to make you pay,” he said after the game.  “Everything was up – my curveball, changeup, slider and sinker.”  The right-hander is a solid 7-2 with a 2.37 ERA in 11 home starts, surrendering just three home runs in 76 innings of work.  Pineiro will be making his eighth daytime appearance, going 4-2 with a 3.94 ERA.  In 11 lifetime starts versus the Red Sox, he is 3-6 with a 5.94 ERA, including a 3-1 defeat on May 5 in Boston.