Posted on September 1, 2010 by Jeff Mattinger in Baseball,Headlines

The Dodgers send their ace to the hill in trying to capture a three-game set, as the team plays its second game without the services of outfielder Manny Ramirez. 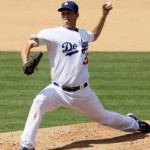 Philadelphia maintained its 1 1/2-game wild-card lead over the San Francisco while staying within three of NL East-leading Atlanta, picking up an 8-4 victory over the Dodgers on Tuesday night.  First baseman Ryan Howard crushed a three-run home run to center field in the third inning to pace the victory, as the Phillies hope that breaks him out of a slump.  “He’s got to get going,” manager Charlie Manuel said.  He came into the game in a 4-for-49 slump.  “I was just happy to have gotten a hit,” Howard commented after the game.  The Phillies finished the month of August with an 18-10 record, their highest win total of any month this season.  Philadelphia has produced a 23-19 record in day games in 2010 (-400), including a 10-10 mark away from Citizens Bank Park.  The club has won 10 of its last 11 day games overall.  Overall this season, the team is 34-33 on the road and has picked up victories in 10 of its last 12 games away from Philadelphia.

Phillies starting pitcher Roy Oswalt is 9-13 with a 3.12 ERA in 26 starts this season, including a 3-1 mark and 2.18 ERA as a member of the Phillies in six outings.  The club has won his last five starts overall, outscoring the opposition by a 25-9 margin, while he personally has a three-game winning streak.  The right-hander has an even 4-4 record and 2.75 ERA in 11 road starts, issuing 16 walks and collecting 68 strikeouts in 72 innings of work.  He will be making just his 10th daytime start, posting a 4-4 record and 2.35 ERA compared to a 5-9 mark and 3.50 ERA in 17 nighttime outings.  In 11 career games (10 starts) versus the Dodgers, Oswalt brings in a 7-3 record and 3.11 ERA, including a 2-0 home victory on August 11.  In that game, he tossed seven shutout innings and scattered five hits.

Los Angeles will wrap up its NL East portion of its schedule this afternoon, as the team has compiled a 13-19 record against the division.  Wednesday night’s loss was the third in the last four games for the club and the team trails today’s opponent in the National League Wild Card race by 6 1/2 games.  Beginning this month, the Dodgers will play 24 of their final 30 games against NL West opponents.  Los Angeles is 41-28 overall at home this season (+370) and the total is 37-30 O/U in those contests.  It’s important to note that the team is 17-9 at home when the total is 7 or less this year (+640) and 29-18 in this situation the last three campaigns (+740).  The Dodgers come in with a dismal 15-18 daytime mark (-480), averaging just 3.5 runs per game and hitting for a combined .242 average.

Dodgers starting pitcher Clayton Kershaw is 11-8 with a 3.01 ERA in 27 starts this season, as the team has alternated wins and losses over his last four outings.  He picked up a 6-2 no decision victory for the club last time out, giving up just a single run and five hits over six innings of work.  The left-hander is a solid 7-4 with a 3.12 ERA in 15 home starts in 2010, issuing 40 free passes while tallying 112 strikeouts in just 98 frames.  He will be making just his eighth daytime start, posting a 4-1 mark and 1.94 ERA, giving up just two home runs in 46.1 innings.  Kershaw is 0-3 with a 5.67 ERA in five career starts versus the Phillies.  On August 12, he allowed two runs over 6.2 innings at Citizens Bank Park, but the bullpen collapsed and cost him the victory.

Bettors will find that the Phillies are 5-0 in their last five games as a road underdog and have won the last four games against southpaws away from Philadelphia.  Los Angeles has won five of seven when favored at home and the under is 5-2-1 in the club’s last eight games at Dodger Stadium.