The teams will be hard-pressed to match last night’s 24 combined runs, with a pair of solid right-handers facing off. 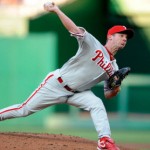 Los Angeles may have finally broken out of its offensive slump, scoring a combined 23 runs in the last two games, including 15 in a Tuesday night victory over the Phillies at Citizens Bank Park.  “We hope to give the pitching staff a little confidence and let them know their offense is clicking,” outfielder Andre Ethier said.  “At the same time, it gives us a little confidence.”  The team averaged just 2.5 runs in its first 23 games after the All-Star break before this two-game outburst.  The Dodgers are still just 3-10 at Citizens Bank Park since 2008, which includes five postseason games.  The club is a dismal 2-8 as a road underdog of +125 to +150 this season (-520) and the total in those games is 4-6 O/U.  Los Angeles has won five of its last six games against the NL East, but still stand at 11-13 versus the division this year.

Dodgers starting pitcher Chad Billingsley is 9-6 with a 3.82 ERA in 21 starts this season, but the club has dropped his last two outings.  In those starts, he has allowed just three runs and nine hits over 12.2 innings.  The right-hander is 5-2 with a 2.95 ERA in 11 road starts, giving up just three home runs in 61 frames.  He enjoyed a dynamite July, posting a 3-1 mark and 2.79 ERA, while not giving up a single long ball over the entire month.  Billingsley has posted a 7-5 record and 4.78 ERA in 16 nighttime starts compared to a 2-1 mark and 0.86 ERA in five daytime outings.  In four lifetime outings versus the Phillies, he stands at an even 1-1 with a 3.24 ERA.

Phillies starting pitcher Roy Oswalt is 6-13 with a 3.50 ERA in 22 starts this season and is still searching for his first win as a member of the two-time defending NL champs.  In his first two starts for Philadelphia, he is 0-1 with a 4.38 ERA, allowing opponents to hit for a .222 average.  Oswalt revealed after his last start that he is going through a “dead arm” period that crops up every year.  “It usually lasts about 100 innings,” he said.  “Sometimes it comes and goes.”  In 10 career games versus the Dodgers, he has compiled a 6-3 record and 3.47 ERA.

Bettors will take note that the Dodgers are 0-4 in Billingsley’s last four starts versus the NL East, while the over is 3-1-3 in his last seven against the division.  Philadelphia has a potent 7-1 record in its last eight games versus the West and the over has cashed in four out of five in this situation.