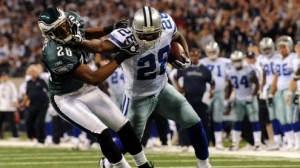 Rookies moving up depth charts – We know that high draft picks and big name rookies are going to get a chance to contribute right away. What’s far more interesting at this point, though, is to hear about guys taken in the mid to late rounds, and especially undrafted free agents, who are performing well and moving up the depth chart. Even if these players don’t end up making the starting roster it can be useful to know that they are doing well and are trusted by the coaching staff. That way you are ready to deal with them when they do get their chance.

Fringe free agents getting active looks – Every year there are a few free agents who are picked off the scrap heap by a team and wind up being major contributors. The sooner you can get a sense of who those players are, the more of an edge you will have over the public. If the public has never heard of a player,or thinks that he is not good, then you will have a big edge if you know he is ready to perform.

Players coming off injury – If a player who was injured significantly last year is actively participating in all camp activities this year – especially early in the camp – then you can be reasonably confident that he is back and ready to perform at a high level. You can’t always rely on the opposite side of this, though – a veteran who is injured may take it easy during camp but still return strong for the season.

Teams making significant tactical changes – If a team is making a big change – like going from a 3-4 to a 4-3 defense – then any news you can get about how it is going, how the personnel is suited to the change, and how smooth the transition is is going to be useful for you – especially early in the regular season.

Teams bringing in new players – Teams usually come into camp with more bodies than they need. Sometimes, though, they don’t have enough at a position of concern. It’s a very good idea to pay attention to the players who are invited to join teams after camps have started. If a team is actively adding at a certain position or area then there is a pretty good chance that that area is a real concern heading into the season.

Players making big plays – All of the big sports media outlets send guys to all of the camps to report on what is going on. Without fail they will report about a receiver who is catching everything thrown within 50 feet of him, or a running back who is breaking every touch for 50 yards, or a cornerback who is picking off every pass. This is purely unscientific, but I am pretty sure that I haven’t seen one of those players that those guys have talked about ever actually have a big year once the season starts. Don’t get fooled by stories of guys making big plays in August.

Quarterbacks who are looking great – What I said before is especially true for quarterbacks. Of course a quarterback is going to look good when he can’t be hit and when the defense is at half speed. It can be easy to be seduced by a guy who looks amazing outside of game conditions – just think of JaMarcus Russell. Nothing that a quarterback does matters until we know if he can perform under game pressure, though. If you look around hard enough you can find a report that every quarterback in the league is looking like an MVP in camp. Believing those reports will be costly for you.

How active veterans are – If Brett Favre has taught us anything the last couple of years it’s that training camp is essentially meaningless for veterans. He didn’t even bother to show up last year – even though he was joining a new team – and he still had a great season. If a veteran player is not being a significant participant in camp it just doesn’t matter in almost every case.

Anything coaches say – The next time a coach answers a question honestly in training camp will be the first time. Just think about it – what’s the possible incentive for a guy to be honest and give his opponents any insight into what is actually going on? If a coach says something you could potentially just assume the opposite, or at the very least you should just ignore it. I had this reinforced last year when I heard an interview with new head coach Todd Haley from Kansas City’s camp. Haley talked extensively about how much he was enjoying working with offensive coordinator Chan Gailey and what a good relationship they had. Weeks later Gailey was fired after the third preseason game.