Posted on August 23, 2012 by Brett David Roberts in College Football,Headlines 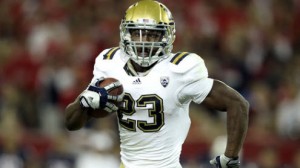 Offensive coordinator Noel Mazzone decided he’d implement some changes when he arrived to UCLA, and among those included stressing a faster no-huddle offense, which showed its consequences early in spring play as the Bruins made every effort to adapt to his rigorous expectations.

Finding a QB has been priority No. 1, and it has been that way now for seven years, since the 2005 departure of Drew Olson. There was no answer found in spring. They had guys in the mix for the job: Seniors Kevin Prince & Richard Brehaut, Jerry Heuheisel, and a less experienced option in freshman Brett Hundley. It was announced now that the choice would be Hundley:

“All four quarterbacks have raised their level of play significantly since my staff and I took over, and we are excited about all of them,” Mora said in a statement from the school. “That said, Brett has consistently demonstrated the qualities we value in a starting quarterback and is an outstanding leader who commands the respect of his teammates. He has shown excellent decision-making skills, and his accuracy and timing continue to improve with each practice. In addition, he has shown the mobility and creativity needed when a play breaks down.”

Hundley will inherit a great core group of options, including Sr. Johnathan Franklin, who promises to be among the best RBs in the Pac 12. He’ll look to catch more passes this year, which should only further his status among the Pac 12 and nationally, as it will make him a more versatile player from whom more will be asked. Malcolm Jones was the 2009 Gatorade National Player of the Year and he’s along with Jordon James and Damien Thigpen, the Bruins will have some options on the ground…Still, with the actual WR position being a bit thin, they will be asked to catch some passes, too.

The real issue will be at OL, where they are going to be relying heavily upon Xavier Su’a-Filo, who just returned from a Mormon mission he was on for the last two years. He is expected to be an NFL prospect.

Defense was a weakness for the Bruins last year, who gave up 417 yards per game and ranked 8th in the Pac 12 and 89th nationally. There is reason for optimism with new defensive coordinator Lou Spanos remaking the team. Spanos’ specialty is the 3-4 defense he used with the Pittsburgh Steelers and Washington Redskins. However, it is expected they go with a situation-based defense, employing both a 3-4 and a 4-3. It will serve them well in the Pac 12 with the different types of offenses employed by their opponents.

The DL will have to adjust, but it should reap the biggest benefits if it can. They have a ton of players with high potential: Datone Jones, Cassius Marsh, Owamagbe Odighizuwa, and Brandon Willis, all of whom were highly regarded recruits coming out of high school. However, teams can’t win on potential, as they say, so they’re going to need these guys to produce now. Incoming freshman DT Ellis McCarthy has the highest potential of all of them and will be an immediate impact player on the line.

The back eight is rock solid with CBs Sheldon Price and Aaron Hester both All Conference type players. The same can be said of LBs Eric Kendricks and Patrick Larimore.

Special teams are a huge question mark for UCLA. Jeff Locke returns at punter and is one of the better in the nation. The rest of their special teams are a bit more dubious in talent. Incoming freshman Ka’imi Fairburn will likely get the kicking job, but they’re not sure who will be returning the ball. As of July 31st, according to Peter Yoon, they still had not found their returners.

The Bruins just aren’t good enough to make waves this year, and Athlon magazine predicts a .500 season for Mora’s crew. They had a top 10 recruiting class though, so the future remains bright. They have a long way to go, but should still be exciting to watch.