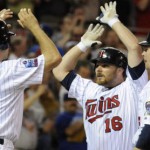 Chicago had dropped seven of nine games to the Twins this season and are in danger of dropping out of the divisional race altogether.  “They are tough losses,” said outfielder Andruw Jones.  “Every time we keep coming back and scoring, it feels like they never give up.”  The team is 6-21 versus Minnesota since May 21, 2009.  The current five-game deficit for the White Sox is their largest in the division since trailing by 5 1/2 games on June 20.  The club has lost four straight games and eight of their last 10 overall.  Despite the recent slide, Chicago has still won 41 of its last 63 games.  The White Sox are 6-9 as a road underdog of +125 to +150 this season (-80) and the total is 5-10 O/U in those games.

Minnesota has captured the first two games of this series by an identical 7-6 score and the team has won seven straight games.  Catcher Joe Mauer hit his first home run at Target Field in Wednesday’s victory, as he went 4-for-5 with two RBIs and the Twins pushed their lead in the AL Central to a season-high five games.  It’s a different guy pretty much every night,” Twins manager Ron Gardenhire said of his offense.  “You like for it to be moving around a big.  Guys have been putting some pretty good wins out there.”  Mauer has batted .442 with four home runs and 30 RBIs since the All-Star break, moving his season average to .335.  The club is a stellar 33-17 versus division opponents this year (+910) and the total is 28-20 O/U in those contests.  Minnesota has also had success against southpaws in 2010, producing a 25-17 record (+690), which is an improvement from its 82-75 mark over the last three campaigns (+180).