The Marlins are desperately trying to reach .500 and make a run at the NL East division leaders, as they send their ace to the mound in a series finale against the Rockies. 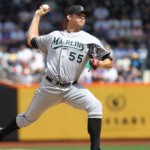 Colorado scored 18 runs in splitting the two opening games of this series, but was held to two runs and five hits in a 5-2 road defeat against the Florida Marlins at Sun Life Stadium.  The Rockies offense still ranks second in the National League in runs scored (454) and RBI (436).  They are also one of only two teams to rank in the top three in average, slugging and on-base percentage in the National League (Reds).  Much of the team’s offensive success has taken place at home, as the team is averaging just four runs per game and hitting for a combined .231 average away from Coors Field.  Colorado has managed to compile a 19-13 mark in daytime action this season (+500) with the total being 10-21 O/U in those games.

Rockies starting pitcher Jorge De La Rosa is 3-2 with a 6.16 ERA in six starts this season (+110), which is a dramatic change from his 16-9 record and 4.38 ERA in 2009.  “I can pitch better and I will be better than that because I’ll keep working hard and try to help my team,” De La Rosa said.  The left-hander has given up seven runs in each of his first two outings since coming off the disabled list.  He has posted an even 1-1 record and 10.80 ERA in two road starts, issuing nine walks and striking out six in 8.1 frames.  In eight career appearances against the Marlins, De La Rosa is 3-4 with a 6.57 ERA, including an even 1-1 mark and 8.68 ERA in three outings (two starts) in Florida.

Florida is playing sixth game of its current three-team, 10-game homestand, with the final game of a four-game set against the Colorado Rockies.  “Right now the importance for the team is to get back to .500 and above,” Wednesday starting pitcher Ricky Nolasco said.  With a 46-48 record (-230), the Marlins know the urgency that’s needed to get back into the playoff picture.  Last night’s win improved the team’s all-time record to 6-1 in games of being shut out by at least 10 runs at home.  The starting rotation has been a success story at home, posting a 3.30 ERA in 50 games.  They own the fourth-lowest home ERA among NL rotations.  Florida has managed to score 4.5 runs per game at home this season, with opponents not far behind in plating 4.4 at Sun Life Stadium.