This afternoon’s series finale features two of the hottest hurlers in all of baseball. 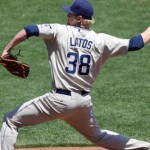 Los Angeles managed to win Tuesday’s opener despite being held to five hits and only collected four in Wednesday’s 6-1 loss to the San Diego Padres at Petco Park.  “Unfortunately, when you are not scoring a lot of runs, you’re putting a great deal of stress on the pitching,” manager Joe Torre said.  The Dodgers have still won five of seven contests and sit six games back of the Padres in the division.  The club is a dominating 25-9 against NL West opponents (+1,630), which is by far the best intra-division mark in baseball.  Los Angeles made a move just before last night’s game, acquiring outfielder Scott Podsednik from the Kansas City Royals.  He’s among the major league leaders with 30 steals and batting .379 during a current 15-game hitting streak.  The Dodgers are an even 13-13 in day games (-190) this season and the total is 10-14 O/U in those contests.

Dodgers starting pitcher Vicente Padilla is 4-3 with a 3.41 ERA in 11 starts this season, with the club dropping his last two contests.  In those games, he has managed to allow just a single run and seven hits over 13 innings.  The right-hander is an impressive 2-1 with a 0.98 ERA in four starts this month, allowing opponents to hit for a lowly .161 average.  Padilla will be making his fifth daytime start this afternoon, producing a 1-1 mark and 4.76 ERA in comparison to a 3-2 record and 2.74 ERA at night.  In 16 career appearances (seven starts) versus the Padres, he is 2-1 with a 3.23 ERA, facing them just once since 2006.

San Diego had gone 16 consecutive innings without a run until breaking through in the sixth inning last night, moving the team to a 13-8 record this month (+420).  It was also the first victory for the Padres against the Dodgers at home this season, as the visitor picked up a three-game sweep in the middle of May.  The first-place squad is now 31-20 at home this season (+840) and the total is 25-22 O/U in those contests.  They also moved to 20-16 against NL West foes on the year (+520)  The club has stolen 89 bases this year, ranking second in the National League.  In 46 games that they’ve swiped a bag, the Friars have produced an incredible 38-8 record.

Padres starting pitcher Mat Latos is 11-4 with a 2.48 ERA in 18 starts this season and the comes in with a six-game winning streak.  The club has actually won his last seven starts overall, outscoring opponents by a 37-10 margin.  The right-hander is a solid 4-2 with a 2.23 ERA in seven home starts, giving up just three home runs in 44.1 innings of work.  Latos stands at a perfect 3-0 with a 0.86 ERA in three starts this month, issuing just four walks while striking out 22 in 21 frames.  He lost his only career start against the Dodgers in his final appearance of his rookie campaign, surrendering four runs (two earned) and three hits over just three innings.