The Phillies must get their offense back in gear in order to avoid being swept at Citizens Bank Park for the first time against today’s opponent. 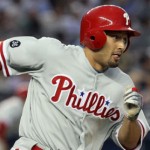 Houston will try to capture its first four-game sweep at Citizens Bank Park and the club is 15-7 all-time at the venue, which is the best record of any visiting NL club.  Last night’s 3-2 victory was the second time that the Astros used a former Phillies hurler to beat their former club, as left-hander J.A. Happ picked up the victory after watching Brett Myers capture a win on Tuesday.  “I’m sure they wanted to pitch good,” Phillies manager Charlie Manuel said.  “But at the same time, they could have been anybody.”  The club will be playing its seventh straight game on the road against the NL East this afternoon, posting a 12-14 mark versus the division this season.  Houston comes in with a 19-20 daytime record (+540) and the total is 17-20 O/U in those contests.  The team is 12-10 in August (+630) and 45-35 over the course of this month the past three campaigns (+2,180).

Astros starting pitcher Wandy Rodriguez is 9-12 with a 4.00 ERA in 25 starts this season and the club has dropped four straight games with him on the hill.  Over that span, the team has been outscored by a 23-11 margin, while he has given up 24 hits in 26.1 innings of work.  The left-hander has a 3-7 record and 5.30 ERA in 12 road starts, as opposing hitters have combined for a .313 average.  He will be making his 10th daytime appearance, producing a 3-4 mark and 3.48 ERA, issuing 16 free passes and collecting 43 strikeouts in 54.1 frames.  In four lifetime appearances (two starts) versus the Phillies, Rodriguez has compiled an even 1-1 record and 3.95 ERA.

Philadelphia has taken a deuces wild approach to this series, tallying just two runs in all three games thus far and managing to hit just .218 in the process.  “Same story, we came up short,” Manuel said.  “If we’re going to score one or two runs, we’re going to get beat.”  The club has been held to two runs or fewer in six of its past seven contests overall. The Phillies are still in a good spot due to the Atlanta Braves being swept by the Colorado Rockies, remaining just 2 1/2 games back in the NL East divisional race.  At home this season, Philadelphia has compiled a solid 40-24 record (+260) and have gone 19-7 in its last 26 games at Citizens Bank Park.  The team is 19-16 versus left-handed starters this season (-410) and the total is 15-20 O/U in those games.

Phillies starting pitcher Kyle Kendrick is 8-6 with a 4.58 ERA in 26 appearances (24 starts) this season and the team has alternated wins and losses over his last four starts.  He picked up an 8-1 home loss last time out, giving up five runs and nine hits over 5.2 innings of work.  The right-hander is 3-4 with a 5.46 ERA in 12 home starts, surrendering 11 home runs in 64.1 frames.  He will be making just his fifth daytime start this afternoon, posting a 1-0 record and 4.70 ERA.  In three career games (two starts) versus the Astros, Kendrick is an even 1-1 with a 4.20 ERA, issuing two walks and collecting 11 strikeouts in 15 innings.

Bettors will need to make note that the Astros are 6-24 in Rodriguez’s last 30 road starts versus winning teams and the over is 8-2 in his last 10 starts as a road underdog.  Philadelphia is just 1-7 versus the NL Central in its last eight opportunities, but the club is 8-3 against the division with Kendrick on the hill.