Posted on November 21, 2018 by Brett David Roberts in Headlines,NFL 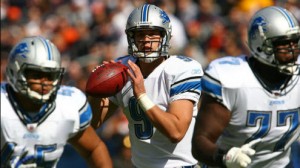 The Chicago Bears are 7-3 and have won four straight weeks to sit atop the NFC North Division. It will travel to face the Detroit Lions as narrow 2.5-point favorites in the first game of Thanksgiving day. The game will air at 11:30 AM CST on CBS, and it has an over/under set at 43.5 points according to NFL oddsmakers at 5dimes.

Chicago won last week 25-20 over the Minnesota Vikings. Mitchell Trubisky threw 20 of 31 for completion for 165 yards, but he launched two interceptions to his one touchdown. Trubisky did rush for another 43 yards on 10 attempts, and Jordan Howard added 63 yards on 18 carries.

The Bears gained 148 yards via the rush. Taylor Gabriel led all receivers with 52 yards on seven catches, targeted nine times in the game. Howard caught just one pass for two yards. The Bears led 14-0 at the half, but it gave up 17 points to the Vikings in the fourth quarter, narrowly holding on to win its fourth straight.

Trubisky has largely been behind the Bears’ turnaround, but he is listed as questionable for this game with a shoulder issue. Coach Matt Nagy told ESPN that he is “cautiously optimistic” Trubisky will be able to start, and given the gravity of a Thanksgiving game it would be surprising if he sat this one out. On the season, Trubisky has 2,469 yards at a 65.4 percent passing clip, with 20 TD passes and nine interceptions. His passer rating is 97.7.

Additionally, he has compiled three games in his past five with 40 rushing yards or more, accented by an 81-yard effort he had in the Bears’ 31-38 loss to New England on Oct. 21. Trubisky averages 7.1 yards-per-carry on his 51 rushing attempts, giving the Bears its first dual-threat quarterback in a long time. His top receivers Taylor Gabriel, Tarik Cohen, Allen Robinson, and Trey Burton all have 400 or more receiving yards on the season, with the quartet accounting for 14 of the team’s 20 passing touchdowns.

Howard has been something of a disappointment in the backfield, but the Bears’ identity is now built around its passing game. Howard is averaging just 3.4 yards-per-carry, while Cohen is slightly more successful in far fewer attempts, with 4.3 yards-per-carry on 63 attempts. Gabriel has rushed just eight times for 53 yards but is No. 1 on the team in receiving yards and is best-functioning as a wide-out, despite ranking No.2 on the Bears in yards-per-attempt while rushing. Chicago has a potent offense that ranks No. 3 in scoring at 29.4 points per game while holding opponents to just 19.5 points.

The Detroit Lions are 4-6 on the season but boast a 3-2 record at home where the Thanksgiving game shall take place. Detroit snapped a three-game losing streak last week with its 20-19 win over the Carolina Panthers.

Detroit averages just 22.2 points per game while surrendering 26.3 per game, accounting for a point differential of negative-4.1 points. The Lions still are built around the passing connection of Matthew Stafford and his receivers. Stafford has 2,605 yards at a 66.3 percent clip, averaging 241.9 yards per game, while Kenny Golladay and Golden Tate have combined for over 1,200 yards as the Lions’ top two receivers. Golladay has five touchdowns and Tate has three, and that accounts for nearly half of the Lions’ 17 touchdowns.

The Lions have been poor rushing the ball outside of Kerryon Johnson, who is averaging 5.4 yards-per-carry on his 118 attempts, and he is tied for the team lead in touchdowns (3) with LaGarette Blount. Blount averages just 2.3 yards-per-carry, and the Lions are good for just 4.3 yards-per-carry as a team.

Stafford has not been wildly successful rushing either, with just three yards-per-carry on his 21 tries. Detroit is going to have a tough time mustering the offense to keep pace with the Bears, and this is a game bettors will place high confidence on the Bears’ both being hot, and having a positive point differential compared to Detroit’s lackluster .400 season thus far.