The Colorado Rockies (31-35) and San Francisco Giants (43-24) will open up a National League West series Friday night at AT&T Park, with the first pitch scheduled for 10:15 p.m. ET

END_OF_DOCUMENT_TOKEN_TO_BE_REPLACED 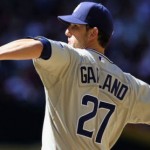 END_OF_DOCUMENT_TOKEN_TO_BE_REPLACED

Colorado and San Francisco play the final game of a three-game series on Wednesday night, with the home team looking to avoid being swept for just the second time at AT&T Park.