END_OF_DOCUMENT_TOKEN_TO_BE_REPLACED

The Chicago Cubs and St. Louis Cardinals continue their rivalry with the second game of a weekend series at Busch Stadium

END_OF_DOCUMENT_TOKEN_TO_BE_REPLACED

The Reds must remain focused on the task at hand, as they may look ahead to next week’s series against the Cardinals. 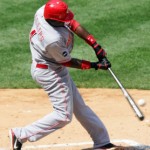 Cincinnati has turned the tide against the Cubs this season, blanking them 3-0 at Wrigley Field on Friday afternoon.  The Reds are now 8-3 against them this season, after tallying a disappointing 5-10 mark in 2009.  At 62-48, the club is a season-high 14 games over .500 after winning five of their past six games, including a 4-1 mark on this road trip.  The team must remain focused over the next two games and not look ahead to a three-game series against the Cardinals starting Monday.  “I can’t put too much importance on St. Louis because they’re not here yet,” manager Dusty Baker said.  “You have to win games now before we get there.”  The pitching staff has posted a 3.01 ERA since June 17, which is the second-best mark in the majors over that span, behind only the White Sox (2.87).  Cincinnati is 20-18 in day games this season (-50) and the total is 11-22 O/U in those contests.  The Reds are also 3-4 this season (-170) and 11-14 the last three years after shutting out an opponent (-140).

END_OF_DOCUMENT_TOKEN_TO_BE_REPLACED

The Cubs are hoping to get the offense back on track in the rubber game of the series against NL Central rival Houston. 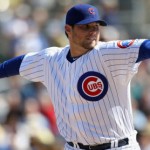 Chicago continued to offer little to no run support for starting pitcher Ted Lilly on Tuesday night, as he’s received the lowest run support of any hurler in the Major Leagues.  Coming into last night’s 6-1 loss against the Astros at Minute Maid Park, he had received just 2.43 runs of support per start.  “Lilly’s been a model of consistency,” manager Lou Piniella said.  “He gives you a very reasonable chance of winning a baseball game when he goes out there.”  The Cubs had averaged 5.93 runs per game in their last 14 contests before being shutout in the second game of this series and the club’s .300 average since July 9, was by far the highest in the National League over that span.  Chicago is 24-27 in day games this season (-1,100) and the total is 23-25 O/U in those contests.

END_OF_DOCUMENT_TOKEN_TO_BE_REPLACED

The Windy City is still celebrating a Stanley Cup victory, but the focus shifts to Wrigley Field and the return of interleague play.

The Chicago White Sox broke through and won back-to-back games against the Tigers, after going 4-20 this season in games following a victory.  The lineup has also homered in 13 of its last 14 games and rank third in the American League with 70.  The buzz for this series is tempered compared to previous season, mainly due to the poor performance of both teams and the city celebrating a Stanley Cup victory.  Manager Ozzie Guillen summed it up in a direct way by saying, “Very bad teams and the Blackhawks.”  The White Sox are 2-1 in interleague play thus far in 2010 (+100) and have gone 26-13 over the last three years (+1,320)