END_OF_DOCUMENT_TOKEN_TO_BE_REPLACED

Two teams that are in the thick of the NL playoff race face off in a quick one-game series due to a rainout in May at Coors Field. 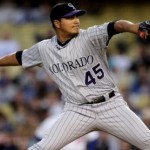 Philadelphia heads to Colorado to play a single game series due to a May rainout on Thursday night at Coors Field.  The Phillies followed a three-game sweep of the Padres in San Diego by picking up two of three versus the Dodgers in Los Angeles.  The team is 5-1 on its seven-game road trip and leads tonight’s opponent by 5 1/2 games in the NL Wild Card race.  Overall, the club has posted a fantastic 11-2 record away from Philadelphia since the start of August.  Their upcoming schedule of opponents has a combined .498 winning percentage over the final 29 games of the season and the Phillies will play 16 of those games at Citizens Bank Park.  Philadelphia started the month off with a 5-1 victory on Wednesday and the team has compiled a fantastic 35-21 record in September over the last three years (+190).

END_OF_DOCUMENT_TOKEN_TO_BE_REPLACED

The Phillies are hoping some familiar faces return to the lineup in an important three-game series that may go a long way in determining the NL Wild Card race.