The Atlanta Braves (37-35) and Washington Nationals (37-34) will meet up in a National League East matchup Friday night at Nationals Park, with the first pitch scheduled for 7:05 p.m. ET

END_OF_DOCUMENT_TOKEN_TO_BE_REPLACED

The Boston Red Sox (21-29) and Atlanta Braves (28-22) will continue a MLB interleague series Tuesday night at Turner Field, with the first pitch scheduled for 7:00 p.m. ET on ESPN

END_OF_DOCUMENT_TOKEN_TO_BE_REPLACED

The Los Angeles Dodgers (17-22) and Atlanta Braves (22-18) will open up a three-game National League series at Turner Field Friday night, with the opening pitch scheduled for 7:30 p.m. ET

END_OF_DOCUMENT_TOKEN_TO_BE_REPLACED

The Cincinnati Reds (78-52) and Arizona Diamondbacks (64-65) continue a three-game National League series on Tuesday night at Chase Field, with the first pitch scheduled for 9:40 ET

END_OF_DOCUMENT_TOKEN_TO_BE_REPLACED

Two of the National League’s worst teams try to gain some type of momentum during the final week before the All-Star break. 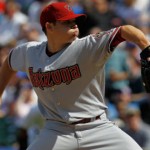 Chicago heads West for the second time in the last 14 days to begin a three-game series at Chase Field against the Arizona Diamondbacks.  The Cubs can only hope to forget Sunday’s 14-3 blowout defeat at the hands of division-rival Cincinnati.  “They hit seven home runs,” manager Lou Piniella said.  “You would think we could get a few balls up in the air and let them ride out of here.”  Chicago will look to win its first series opener since May 25, as they’ve lost 11 series openers in a row.  The Cubs are desperate for a season turnaround having lost 21 of their last 32 games, but may have success in doing so against tonight’s opponent.  Chicago stands at 7-2 against National League West competition, including a 3-1 mark against the Diamonbacks.  The Cubs are 28-45 against all other foes.

END_OF_DOCUMENT_TOKEN_TO_BE_REPLACED

Great, great story out of Pittsburgh today – I love this one. Buffalo was in town to play the Penguins. Before the game began the returning Olympians were introduced to the crowd. Ryan Miller, the tournament MVP and star goalie of the American team was given a very loud standing ovation – even though he plays for the visiting team. Sidney Crosby, the biggest hockey hero in the league, and the biggest Pittsburgh has had since Mario, got an ovation that was clearly less rousing. It gets even better – when the replay of Sid’s goal was shown, the one that won the gold medal and made certain that Crosby will be a hero in Canada for eternity, he was booed. In his own house. Awesome. Just awesome.