The Braves are in position to win their 18th home series of the year in Sunday’s series finale against the Marlins. 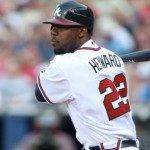 Florida fell 12-3 in the second game of this three-game set in Atlanta, falling 8 1/2 games back in the NL East race.  The 12 runs allowed were a season-high by the Marlins and starting pitcher Ricky Nolasco managed to last just two innings.  “I just stunk.  I didn’t throw anything where I wanted to,” said Nolasco.  The club still has seven  meetings remaining in the season series which includes today’s series finale at Turner Field.  The Fish expect rookie outfielder Mike Stanton to get the start in right field this afternoon after not starting in the previous two games.  Also, third baseman Wes Helms is also expected to return after sitting out the first pair of games in this series.  Florida still holds a solid 27-23 record against divisional opponents (+460) and the total is 26-21 O/U in those contests.  The Marlins also possess a winning 17-15 mark in daytime games and are 64-58 under the sun the past three years (+1,060).

Marlins starting pitcher Josh Johnson is 11-5 with a 2.36 ERA in 26 starts this season and has alternated wins and losses over his last five starts.  In his last outing, he picked up a no decision in a 6-5 road loss to the Mets, allowing four runs (three earned) and six hits over five innings of work.  The right-hander is 4-3 with a 3.51 ERA in 12 road starts in 2010, issuing 24 walks and tallying 51 punch outs in 74.1 frames.  He will be making just his ninth daytime start, producing a 4-2 mark and 2.88 ERA, as opponents are hitting for a combined .217 average.  Johnson has faced the Braves 13 times (12 starts) in his career, going 4-2 with a 2.64 ERA, including a no decision on July 2 at today’s venue.  In that outing, he gave up just a single run on six hits and didn’t walk a single batter over six innings.

Bettors will be interested in knowing that the Marlins are 8-2 in Johnson’s last 10 Sunday starts and the over is 18-6-2 in his last 26 outings away from Miami.  Atlanta steps in with a 1-4 mark in its last five games as a home underdog, but the club is 6-1 in Lowe’s last seven Sunday efforts.