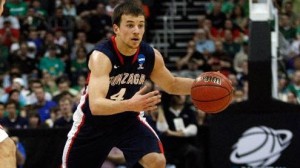 College basketball oddsmakers are setting the line 9-points in favor of Gonzaga with an O/U of 146 in the contest.  It will air at 7:15 on CBS.

UCLA snuck by SMU in the second round of the tournament on a purely garbage call, getting a goal tending on a shot that was well short and had zero chance of dropping through the net. What a fantastic way to end a season on the call of a reviewable play the referees were far too egotistical to admit error on. SMU coach Larry Brown was livid, and rightfully so, the call was not just controversial but changed the outcome of the game, in a most horrible way.

UCLA is 23-13 thus far (tournament inclusive) on the season and posted an 11-7 record in Pac-12 play in the conference schedule. A somewhat predictable defeat to Arizona ended its regular season, despite hanging with the Wildcats and even having tied the game at the half.

Norman Powell had a huge game going 8 of 17 from the floor en route to 21 points. Youngster Kevon Looney struggled and was nearly invisible, which is not what he needs to improve his potential NBA Draft stock.

Should Looney flounder in this tournament, it’s still possible he choose not to declare for the NBA draft in June. Looney has averaged 11.8 points and 9.2 rebounds per game this season, however, and a strong double-double player in a major conference usually has a place in the first round.

Powell and Bryce Alford are the workhorses offensively, though, accounting for 31.5 points per game and Alford also dishes out five assists per. The Bruins are a dangerous three-point shooting team, connecting on 36.3 percent. Alford has attempted 216 threes this season and connected on 79 of them, while Isaac Hamilton is also a good marksman off the bench, having hit 57 threes this year in averaging 10 points per game.

In its opening win over SMU, it was guard Bryce Alford that made the difference. The son of legend Steve Alford connected on 9 of 13 from the field including an astounding 9 of 11 from three (notwithstanding the egregious goal tending call), and the Bruins also got 19 points, six rebounds and four assists from Normal Powell.

UCLA led by four at the half, but was outscored 29-26 in the second half including a huge SMU run that rallied the team from down double-digits. That effort in getting back in the game may have cost Brown’s squad, but it was a close game and the Bruins still managed to win despite 18 turnovers (!) and just 42 percent shooting from the field. Even so, UCLA hit 10 of 20 from distance and held a plus-4 advantage on the glass in the contest.

UCLA easily took care of business against UAB, winning 92-75 after leading by nine at the half. Tony Parker led the way with a highly efficient night, hitting 11 of 14 from the field to notch 28 points (6 of 8 from the line). Parker also led the way in rebounds with 12 receiving some help from Looney, who grabbed 11 rebounds to go with his 10 points. He shot 5 of 10 from the floor and came up with two steals in the game, though UAB turned the ball over just eight times in defeat. UAB didn’t turn it over; they just couldn’t hit any shots, proving the Bruins defense to be tougher than most rate it.

Powell and Alford were just two of five UCLA players to average double-figures this year, and Powell put up 16.5 points, 4.7 rebounds and 2.1 assists in 34 minutes a game for the Bruins this year. Over his last two games, he’s shot 13 of 28 from the floor and 13 of 13 from three-point range to average 20 per over that duo of games.

He struggled more against USC in back-to-back meetings with the Trojans all but preventing him from getting to the line or getting off quality threes. He only knocked down 14 of 30 over that stretch, which was preceded by an even more horrendous game in the second matchup when he shot just 31 percent from the floor while also turning it over three times.

Powell can either keep this team in games and win them, or self destruct the Bruins with tough, contested shots. His three-point shot is hardly deadly either, shooting just 31 percent from behind the arc. He’s seen an uptick in minutes all four years at UCLA, but only his junior campaign was particularly efficient—now he’s more high volume

Alford jacked up 227 triples this year and knocked 88 of them, Four of the rotation players shoot 31 percent from the floor or better but only Alford and Kevon Looney are really all that reliable. Looney is receiving attention as a likely lottery pick, but the 6’9” freshman forward has done little of late, which doesn’t bod well for the Bruins at all.

Alford has put up just 16 points in the last three games while attempting just 14 shots. His lack of involvement and production could cripple the Bruins. There are nights like against USC on Mar 4 when all goes right, 5 of 7 shooting, 13 rebounds, 13 points, all in a 26-point win over the Trojans. In the win over UAB, he knocked down 6 of 13 including 3 of 5 from three-point range to score 22 points while dishing out five dimes, as well.

The Bulldogs are offensive juggernauts. It led the NCAA in field goal percentage at 52.4 percent, while also racking up nearly 80 points per game. The rebounding is solid (30th in nation), and ball movement is crisp. Watching Gonzaga play is a thing of beauty, and with Kyle Wiltjer having somehow increased his productivity by leaps and bounds following transferring to Gonzaga, the team has the weapons to out-score even the best teams in this tournament.

The balance will serve it well, given that in the WCC title win over BYU it put six scorers in double figures, while shooting 53.7 percent from the floor in the game and hitting 8 of 12 from behind the arc.

It’s hard to believe Gonzaga was outscored by No. 15 seeded North Dakota State in the second half, but fortunately for the Bulldogs it held a 13-point lead at the half. The Bisons’ bench hurt the Bulldogs badly, accounting for 35 points, all of which came from Dexter Werner and Paul Miller. ‘

The Bulldogs got a typically strong game from Kyle Wiltjer who lit the Bison up for 23 points, while Gonzaga put three other scorers in double figures. Domatas Sabonis had a nice game off the bench, grabbing 11 rebounds in 23 minutes, five of which came on the offensive glass. The Bulldogs held a plus-11 advantage on the boards, and that is going to be crucial in this game given the fact that Iowa already shoots the ball poorly.

Gonzaga has knocked off North Dakota State and Iowa by an average of 14.5 points between the two games. The win over Iowa came in knockout fashion as the Bulldogs led 46-29 at the half and never looked back, though Iowa was only outscored by two in the second half; it never did threaten the lead held by the Bulldogs.

Kyle Wiltjer hit 10 of 12 from the floor and 4 of 6 from three-point range to notch 24 points , which led the way for Gonzaga. The backcourt of Kevin Pangos and Gary Bell, Jr. accumulated 26 points on combined 8 of 18 shooting. The duo also knocked down six threes between them. Domantas Sabonis came off the pine to light it up and score 18 points in 27 minutes while hitting 6 of 10 from the floor—also grabbing nine boards, as Gonzaga held a +12 advantage on the glass.